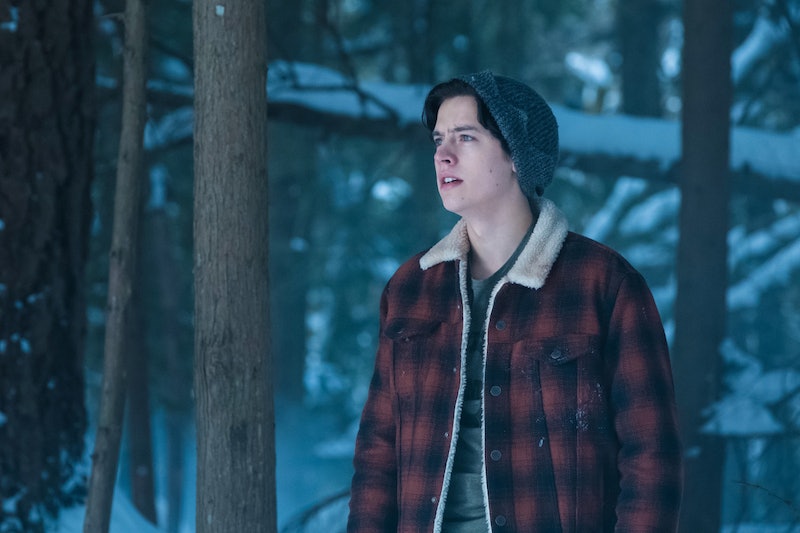 When you're a snake, you're a snake all the way? That doesn't have quite the same ring to it as the Westside Story lyric, but your favorite burger-eating philosopher could be having a major Southside Story moment in the May 11 season finale. Will Jughead join the Serpents on Riverdale? He seems pretty comfortable in that leather jacket, and while I'm digging the look, Betty is understandably concerned.

Like most self-defined misfits, Juggie really just wants to belong. When he's told that Fred Andrews was an unfit guardian and that he'll have to relocate to Southside High and live with a foster family, he seems resigned to that fate and that lifestyle. Why try and act like you're from the right side of the tracks anymore?

Then, while home alone with Betty and after (no big deal) exchanging those three little words, Jughead gets a visit from a whole den of Serpents with a peace offering and a jacket just for him. Lest we forget, one of the things gangs are best known for offering is a sense of family and belonging, and Jughead grins as he tries on the new look. Was it an ironic smile? Will he lean into this bad boy persona? We'll just have to wait until Season 2 to find out. Jughead is is a good, smart person. I'm sure nothing will go wrong.

Also, how much do you want to bet me that the family Jughead was sent to goes by the name Spellman? The finale doesn't show their faces, and that has to mean that they're significant characters from the comics. It's been teased and speculated that Sabrina the Teenage Witch will join Riverdale. While she doesn't fly in during the finale, I have a hunch that her arrival has already been planned. The social worker said that she'd worked with this family before — and Sabrina could have been adopted by Hilda and Zelda in this adaptation.

Fingers crossed, because there is clearly a lot of darkness headed your way in Riverdale Season 2. Jughead may have finally sinked his teeth into a burger, but it's the bikers and their fangs that I'm most concerned about. Maybe a magical new friend will keep our little Jughead off this dark path.