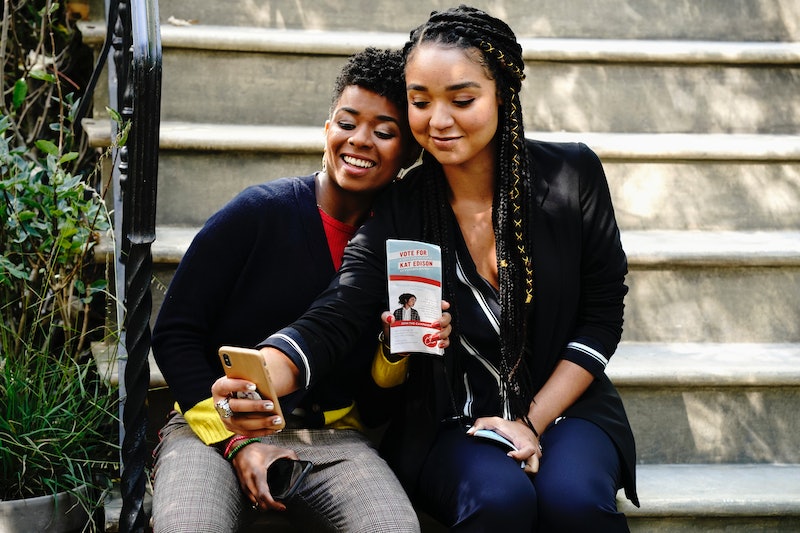 Jonathan Wenk/Freeform
By Martha Sorren
May 22, 2019

Spoilers ahead for Episode 7 of The Bold Type Season 3. Kat and Adena ended their relationship via text message, so it's par for the course that Adena texted Kat to reach back out after their breakup. At the end of the May 21 episode, Kat and her campaign manager, Tia, were taking things to the next physical level in their relationship when Kat's phone screen suddenly lit up with a new message. "Hey. I'm in town. Gallery opening. Would really love to see you," Adena wrote. Um, could this mean Kat and Adena will get back together? That one little text could totally upturn Kat's current relationship — and her campaign for city council.

Kat and Tia's relationship is still pretty fresh, and it's been messy from the start. Firstly, they work together, and mixing business and pleasure is never simple. Secondly, Tia has some conflicting feelings about her sexuality — she repressed her feelings toward women for a long time, and she's only just come around to the idea of exploring that part of herself. Having Kat's ex come back into the picture will only make this already thorny situation even more complicated.

It's possible that Adena wants to see Kat just to catch up platonically, but come on. These two didn't break up because they hated each other. It just wasn't the right timing. At the end of Season 2, Adena revealed that she hadn't been as productive with her art since she started dating Kat. Understandably, Kat hated hearing that she was, as she put it, the opposite of a muse. The two parted ways in Paris and Kat started Season 3 as a single woman.

It seems like the split was helpful for Adena's art, since she's in New York for a gallery show, so perhaps she's ready to try again with Kat now that her career is back on track. But it's not as simple as Adena just deciding she wants to see Kat. A lot of time has passed, and Kat is now falling for Tia. She's not necessarily going to want to drop everything and run back to Adena, especially because doing so could jeopardize her campaign. Tia probably wouldn't want to stay on as the campaign adviser of someone who just broke her heart and went running back to her ex.

Even if Kat doesn't want to start things up with Adena, it doesn't sound like the Adena situation is going away quietly. The synopsis for the next episode says, "When Adena returns to New York, Kat debates whether she's ready to see her, but quickly realizes she might not have a choice." Adena has always been bold in her love for Kat. If Kat waits too long to see her, Adena may just show up at Scarlet to see Kat. It's not very respectful of boundaries, but it's consistent with her character. And even if Kat chooses Tia, Tia may be hurt that Adena is even hanging around. This relationship is very new territory for her, and it wouldn't be surprising if Tia got gun shy about the whole thing upon seeing/hearing about Adena.

Still, as much as fans have been warming up to a Kia (Tat?) relationship, it doesn't sound like Kat and Adena are completely over. Aisha Dee, who plays Kat, told Elle after Season 2 that "they're just in the middle of their story right now, adding that, "It seems like two people who have this insane connection but that it's the wrong timing."

Now doesn't seem like the right time for Kat and Adena either, but with so much history between them, they may feel like they simply have to try again. They ended their relationship still loving each other, and those feelings don't just disappear — even if Kat does also have feelings for Tia. Hopefully whichever decision Kat makes, Adena respects it and Kat is able to choose what's best for both her love life and her budding political career.