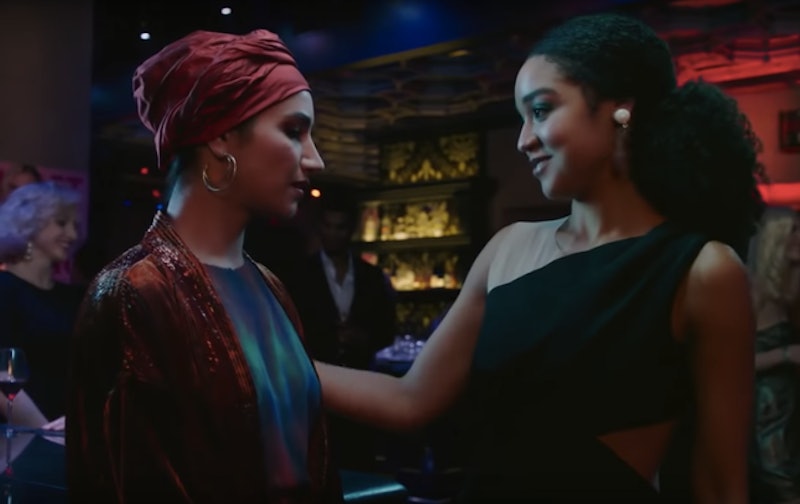 Much like many women navigating relationships in their 20s, The Bold Type's Kat, Jane, and Sutton are really just trying to figure out what they want, who they want to do it with, and whether or not a relationship is working for them. In the Season 2 finale, they were all at somewhat of a crossroads: Sutton finally decided she wanted to make it work with Richard, Jane was picking between Pinstripe and Dr. Ben, and it seemed like Kat and Adena had broken up for good. They didn't really officially split up, so it's possible they worked things out, but things weren't exactly looking up, and Kat will likely have some healing to do when The Bold Type returns for Season 3.

The last time we saw Kat and Adena, their relationship was complicated for two big reasons. Firstly, this was Kat's first same-sex relationship, and she wanted to sow some oats (aka make out with a bunch of women). Adena allowed that, her having done it in the decade before, but things got awkward. The other issue? Adena hadn't produced any art since moving to New York to be with Kat, meaning that she hadn't felt inspired in the slightest while being with Kat. Ouch. Kat figured this out while in Paris for Fashion Week, and when Adena joined her, they had a big talk. Their relationship had hit a wall, and when Adena didn't come to the big Scarlet Fashion Week party, it meant (probably) that it was over. Kat was lucky in that moment to have Sutton and Jane there.

That being said, it may not be totally over for them. Aisha Dee, who plays Kat, told Elle in August that the couple still has some stuff to work out. "They're not really in a place where they've really resolved anything. I think there is frustration for Adena because she's pretty much been dealing with Kat's bullsh*t for the entire season, you know?" she said, adding that Kat hadn't exactly handled things the right way. "They're just in the middle of their story right now. So I think it will be a little bit painful but very interesting, and I think it's something that everyone can relate to. Kat isn't as emotionally mature as she'd like to think."

Hmm... that "in the middle of their story" quote seems like there could be more for them, huh? After all, Kat and Adena have an obvious chemistry. "I think sometimes you just meet people... and there's just a magnet," Nikohl Boosheri, who plays Adena, told Entertainment Tonight. "I think we felt it even working together. These two people are just very drawn together."

Adena is more experienced and older than Kat, but it doesn't mean that she has all the answers in their relationship. If they can get on the same page — and Adena can rediscover her artistic inspiration — they could have a chance. Kat and Adena's future is so up in the air, but at least they have Season 3 of The Bold Type to figure it out.