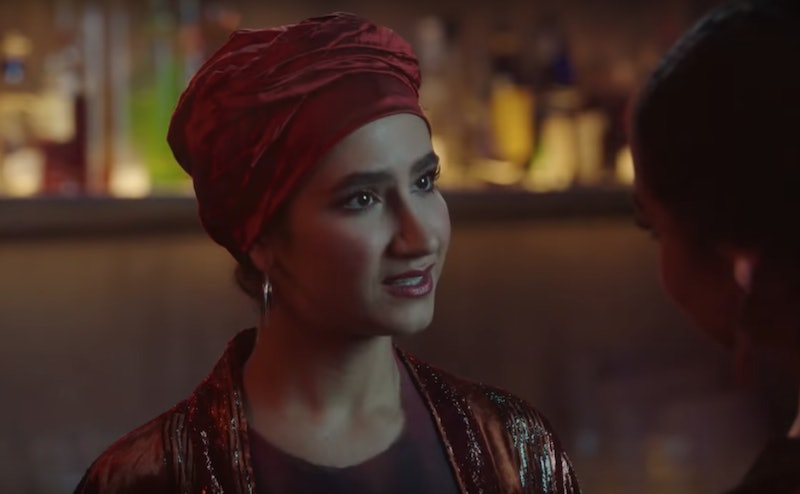 Even though new episodes aired on Freeform Tuesday night, fans had the chance to screen The Bold Type Season 2 premiere early on Hulu. And there's one moment that's been sparking major conversation on Twitter — and GIFs and heart emojis and all that good stuff. Yes, that would be the oral sex scene between Kat and Adena. In many ways, it felt like a groundbreaking moment to feature on a show aimed at teens and 20-somethings. But if you ask actor Nikohl Boosheri, who plays Adena, what she thinks, you may see the scene in a whole new light. Because for as much as this women-focused moment feels significant in terms of the representation it brings to the small screen, it's also rooted in something so universal.

"When we're doing it, it doesn't feel like, 'Oh my god, are we going there? Are we breaking a barrier?' It just feels like this is a love scene between two women," Boosheri explains to Bustle during a recent interview just days after they actually finished filming Season 2. "Between two people who love each other, and care for each other, and are attracted to each other."

As for the subject matter itself? "I don't feel like it's taboo," Boosheri continues, "and I think that we live in this time where our generation — and kind of like how it is for Kat in the show when she comes out to her friends — it's not a shameful thing. It's not a big deal. It's something exciting that she's discovering her sexuality in this way. And I think that that's all of our approach to it too."

Still, that doesn't mean the actor isn't aware of the impact this kind of TV moment can have. "When you see that response, it feels good to be part of something that is pushing boundaries and breaking barriers and challenging stereotypes, and just starting conversations," Boosheri says.

There's also another element to Kat and Adena's love scene worth discussing: "We don't see women very often asking for what they want and owning their sexuality in that way. So to see that between two women especially I think is really refreshing." And it's true; for as much as Adena word-vomits what she really wants from Kat (blurting out, in the middle of a party, that she never goes down on her), it leads to a candid and heartfelt conversation between them.

After Kat admits she's nervous about messing up or not being great at it, Adena provides reassurance. "You know, Kat, it's not even the act that matters. It's you and me being able to have these conversations. Talking about it is the most intimate thing," she says.

On network TV, oral sex is rarely at the forefront of the conversation — or at least the version focused on pleasing women isn't. And a scene depicting the act between two women? That's even rarer. For fans who watched the episode early, that aspect didn't go unnoticed.

Not only is Boosheri's character making strides in the relationship department, but her role has been praised for breaking the mold in other ways as well.

"Adena is a really inspiring character because she doesn't hide behind anything. She's very unapologetic about who she is and all the things that make her complicated and unique," Boosheri explains. "She's feminist, she's a lesbian, she's a hijabi Muslim."

And while her character owns her identity, Boosheri acknowledges that's not always easy for everyone. "There are all these things that could have someone else feel victimized, but these are things that actually empower Adena, and I think there's something really cool and brave and optimistic about that," she explains. "And I hope that people can take away that it's OK to be their authentic selves."

"So many people have reached out to say that it makes them feel like they're less alone, or that they're being recognized. That really means a lot."

As for what else fans can expect from Kat and Adena — aside from their bedroom moment in the first episode — they'll be getting to know each other in a "new and deeper way." Boosheri explains, "Last year, there was so much of this push and pull between Adena and Kat. There's this great connection that they had. But it felt like they were star-crossed lovers almost, with the immigration issues and being pulled away from each other constantly, especially at the end of the season."

"Fans are going to be really excited to just see them be a couple this season and deal with those normal, everyday, universal relationship challenges." FYI, that includes meeting Kat's parents.

At the end of the day, Boosheri knows the impact a character like hers can have — and she seems genuinely appreciative of the feedback she's received thus far.

"It's been really exciting... to be playing a character that we haven't seen on television before — I would say network television, but I don't even think on cable. I've never seen a Muslim lesbian portrayed on screen," she says. "When you read a part like that, you're obviously excited to do something new, to do something that challenges the status quo, but it's also scary, too. You don't want to piss too many people off."

Luckily, that hasn't been the case. "There's been such a positive response and so many people have reached out to say that it makes them feel like they're less alone, or that they're being recognized," Boosheri says. "That really means a lot."

And yes, if you're wondering, she's seen your Kadena GIFs and memes, and she's in awe of it all. "People are really funny on Twitter," she says. "And I'm just like floored at how witty everyone is, and their uses of memes and GIFs... I'm just amazed. The internet is hard."

If fans' response to their latest scene is any indication, the Twitter love for Kat and Adena is only just heating up.