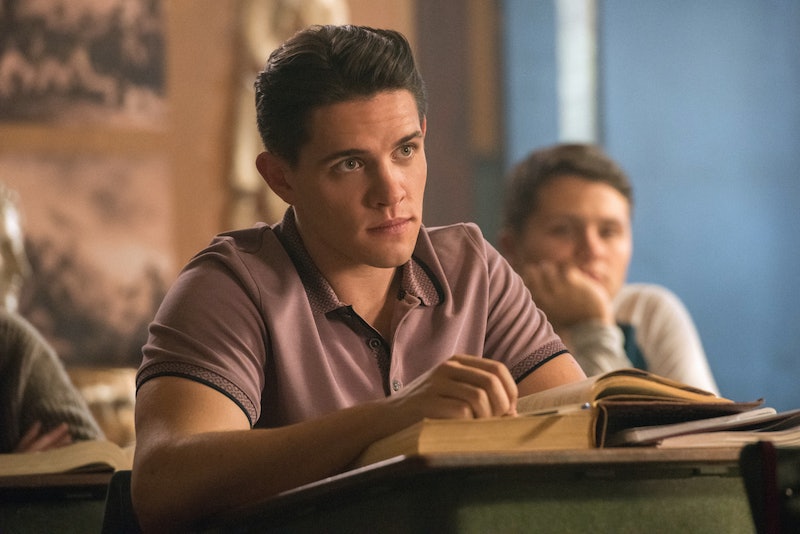 Spoilers ahead for Riverdale Season 3, Episode 13. The Farm may be claiming another person in Betty's life, and she's not going to stand for it. On the Feb. 27 episode of Riverdale, it seems like Kevin is joining the Farm because he thinks the members have been there for him during a hard time (Kevin's boyfriend Moose recently moved to go live with his aunt after his father couldn't accept that he was gay.) Who stepped in to comfort Kevin during in his absence? Evelyn Evernever.

"After what happened with Moose and him leaving town, Evelyn started talking to me," Kevin tells Betty. "She's helped me a lot. She even said she'd introduce me to some cute gay Farmies ... you shouldn't be so ready to see the worst in people, Betty. It isn't healthy."

Betty was upset because she'd actually come to Kevin to get his help in stopping the Farm, which she believes is a cult. "My mom is joining a cult and no one else but me seems to be worried about it," Betty pleads. (Hi, she has a point. Why isn't anyone else concerned?)

But her words may have fallen on deaf ears, because all signs point to Kevin becoming a full-fledged member — and we know from Alice Cooper how dangerous that can be. On Wednesday's episode, Betty met with a Farm escapee who detailed what goes on behind the scenes of the cult. "The farm believes that if you can get close enough to death, you'll see the truth. They claim that you have to survive an extreme ordeal in order to achieve ascension," the informant tells Betty, adding that her sister died during her baptism.

Later, Alice Cooper almost drowns at her own baptism when Polly holds her underwater so long she stops breathing. Alice survives thanks to Betty, but the experience makes here even more committed to the farm, as she claims she was "reborn."

Now that Betty knows exactly how dangerous The Farm can be, she's likely going to try to stop Kevin from joining. The synopsis for the March 6 episode says as much: "Betty takes matters into her own hands when she learns that the Farm has set their sights on someone in her inner circle."

But she may not prove to be successful at stopping Kevin, because there's one big clue about how deep he's going to get into this whole thing. Riverdale is doing another musical episode on March 20, according to Entertainment Weekly. This time they're taking on Heathers, and the show's creator shared the fictional cast list with fans on Twitter. Like he was for the Carrie musical, Kevin will also be the director for Heathers. Only this time, he had backing from some powerful people.

The cast list shows that the school musical is sponsored by none other than the Farm.

Kevin's note on the cast list also says that the Farm is putting on a pizza party for the stars while they do their warm-ups, and Evelyn has a role in the musical, too. So it seems her friendship with Kevin — and the Farm's hold on him — is only getting stronger.

Evelyn has conveniently popped up whenever someone is vulnerable (Ethel comes to mind), so it's not surprising she's latched onto Kevin in his time of need. But Betty's not going to let her friend join rhe Farm without putting up a fight — especially now that she knows exactly what's going on at their ceremonies. Still, it seems like he'll be swayed towards the cult for at least a couple more episodes, so Betty better hurry if she wants to get him out in time.