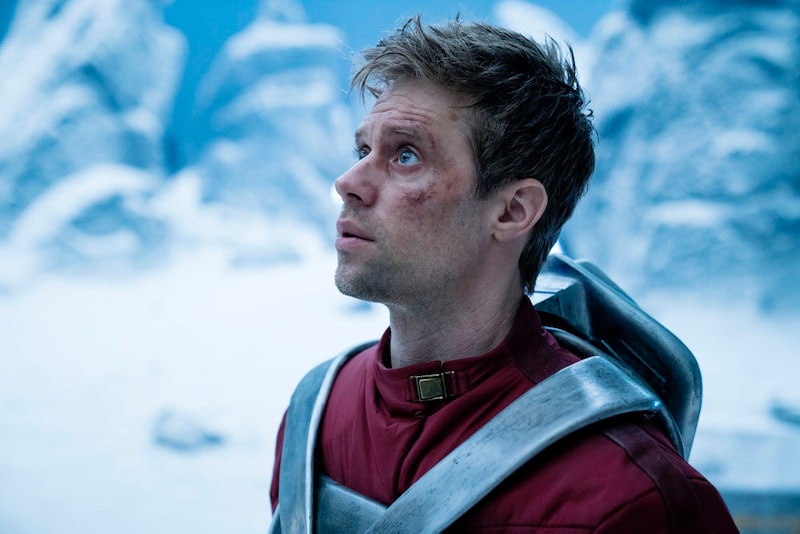 The second season of Krypton wraps up Wednesday, and knowing the show, it will likely end with a cliffhanger. Unfortunately, Krypton Season 3 has not yet been announced, so there's no guarantee the Syfy series will return to tie up its loose ends. But on the plus side, there are a lot of similar shows to ease the wait.

In fact, one involves a character you already know. According to The Hollywood Reporter, Emmett J. Scanlan (aka Lobo, who was introduced in Krypton Season 2) is set to star in his own Lobo spinoff from the Krypton team. It's still in development, but should the project get a series order, it will delve deeper into the anti-hero's dark, murder-filled backstory. This is also good news for Krypton: if Syfy is considering expanding the show's universe, a third season seems likely to happen. And if, for some reason, the spinoff goes ahead and Krypton does not, perhaps some Krypton characters can cross over.

Krypton star Cameron Cuffe is certainly looking to the future with confidence. "Season 1 was very very focused," the actor told Rotten Tomatoes. "It was almost entirely in Kandor. Season 2 expands the world and the story even farther. And Season 3, I think we want to go even bigger again." His theory? Get Seg to Earth's yellow sun so he can get a taste of his grandson's superpowers.

While the first season of Krypton ran from March to May 2018, Season 2 hit SyFy in June 2019. So if the series is renewed, Season 3 could drop at any time — but considering the time it will take production once they get the go-ahead, don't expect Krypton back until summer 2020 at the earliest.

Until then, here are some other new DC comics shows to keep fans occupied.

You may know this show as the one where the EPIX network executives said "oh, was Gotham's Alfred not hot enough for you? Hold our collective beer." The series turns the clock back even further on Bruce Wayne's famed butler and follows his life as a bonafide action hero.

Speaking of the caped crusader, the Arrow-verse is adding to its roster and delving deeper into the crime-addled world of Gotham City. Ruby Rose's badass take on Kate Kane was introduced during the Elseworlds crossover, and fans have been itching for more ever since.

While you're not likely to Watchmen's Rorschach or Doctor Manhattan team up with the Justice League, the political satire was published by DC, so it still counts. The graphic novel adaptation premieres on HBO in October 2019.

Finally, coming to DC Universe in 2020 is this comic book adaptation starring Brec Bassinger about a teenage girl who get superpowers from a magical staff.

If everything goes as planned, Krypton will be renewed for Season 3 and there will be more adventures in store for 2020. But if not, fans surely won't be deprived from the ever-expanding DC universe.