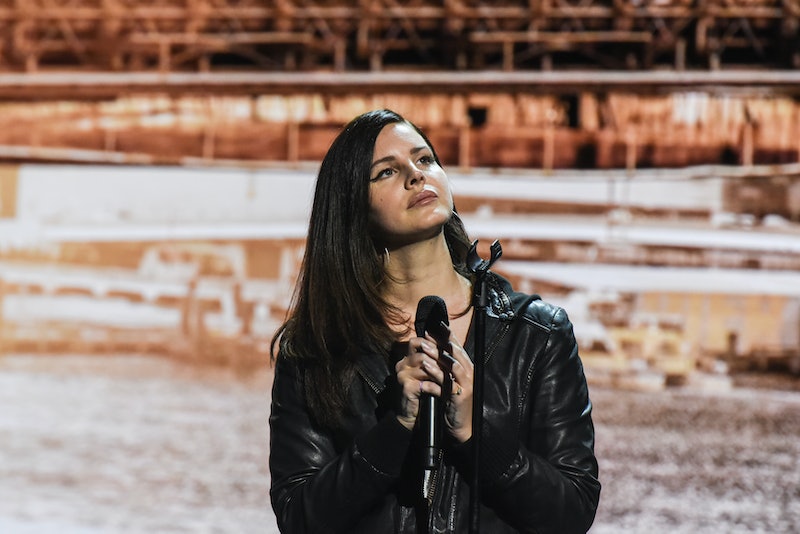 Lana Del Rey's been handing out thirst traps in the form of singles for her upcoming album, Norman F****** Rockwell, for a while now. First there was the Dylanesque "Mariner's Apartment Complex," then the 10-minute-long psychedelic haze dream that was "Venice Bitch," and most recently, "hope is a dangerous thing for a woman like me to have..." The album's due out at the end of March, and now her fans over here are wondering when they'll get to see the new material live. So, will Lana Del Rey tour the UK in 2019?

Wave goodbye to that summertime sadness, folks, because Latitude Festival officially confirmed last week that Lana will be one of their 2019 headliners. The performance will be a "summer 2019 UK festival exclusive," the Guardian writes, and will be the first time Lana plays at Latitude.

UK fans may also be interested to know that the "Born To Die" singer is set to play at Dublin's iconic Malahide Castle in the Republic of Ireland on June 22. This is sure to be one of Lana's most spectacular gigs ever, as the stunning venue dates all the way back to the 12th century, according to its official website, and is set on 260 acres of land.

I reached out to Lana's rep at Satellite 414 to ask if there is any news about other possible performance. Sadly, they replied saying there is "no info at this time."

However, while no announcement about a fully fledged UK tour has been made yet, my guess is there's one coming soon. The singer played three dates in the UK in support of her previous album, Lust For Life, back in August 2017, according to FADER. Those were in Liverpool, Glasgow, and Brixton in London, so here's hoping she'll stop off in the same places (plus a few more) on her next visit to the UK. It's likely that Lana will want to add some UK dates around the time of her appearance at Latitude on Jul. 21, but only time will tell.

If UK fans don't mind travelling a little further, Lana is set to play some other European festivals this summer. According to her website, Lana will be heading over to Tinderbox festival in Denmark on June 27, and then over to Sweden on June 28, where she'll be topping the bill at Lollapalooza. Then the singer will be making her way to sunnier climes. You can catch her playing alongside Disclosure and The 1975 at Portugal's Super Bock Super Rock on July 18, or you can hang with her by the beach when she plays Benicassim festival in Spain on Jul. 19.

No matter what, your summer is going to be Lana-fied. When you're not rinsing the songs from her upcoming album, it's likely you'll get to see her at a festival or — here's hoping — her own tour.

Seeing as it's been a good two years since the star has properly played the UK, I reckon her already ridiculously devoted fans are going to be even more devoted when she returns. This, after all, is Lana's sad girl world. Cue blue jeans, dark paradises, shades of cool, and diet Mountain Dew. We're ready.