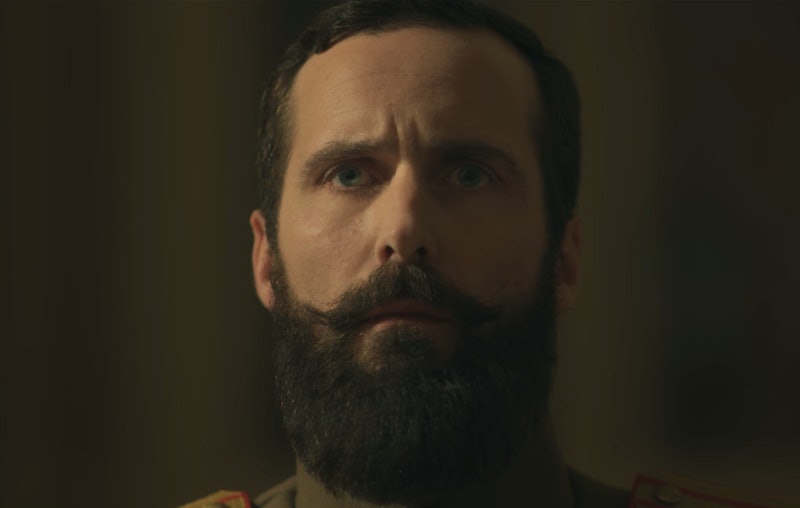 Based around the fall of the Romanovs, The Last Czars comes to Netflix on Wednesday, July 3. The series is a fascinating mix of period drama and documentary — a historical reenactment dominates most of the series, which depicts the downfall of Nicholas II (Robert Jack), while there are explanatory snippets from talking heads. And while it sounds like an interesting, genre-bending format, it's too soon to say whether The Last Czars will return for Season 2.

Per Deadline, the series was first announced in late 2017 as a partnership between Netflix and Nutopia. And the hybrid format is certainly an interesting mix of genres. "[The Last Czars] is about 80 percent drama, 20 percent documentary," Susanna Herbert, who plays Alexandra Feodorovna, told Harper's Bazaar UK. "It's a pretty new style because it's a really high-quality production, and epic in scale, yet you also get the additional benefit of hearing from world-class historians to explain some of the context behind the scenes."

And some context might certainly be needed, since the show promises to cover lots of narrative ground. According to National Geographic, the Russian Revolution began in February 1917, which resulted in Nicholas II abdicating his throne just a month later. The Russian royal had previously inherited the throne in 1894 from his father, Alexander III, and his renouncement ended a 300-year dynasty. Nicholas and his wife, had five children: Olga, Tatiana, Maria, Anastasia, and their son Alexei, who suffered from hemophilia.

Although the show centers on Russia's revolt against the royal family, The Last Czars also puts Alexandra and Nicholas's romance front and center. "I hadn't appreciated how unusual it was for an emperor and empress to be properly in love," Herbert told the British magazine. "I read their letters to each other, and they were quite raunchy. They had a real passionate connection, and they shared a bedroom which wasn't usual at the time."

Indeed, the couple's active sex life is hinted at in the series trailer. And while they may look comfortable onscreen, Herbert confessed that she and her co-star met the day before they had to film their first sex scene. "We had to get to know each other quite quickly, but the crew made everybody feel safe — and in many ways it's easier doing sex scenes because you've got closed sets and you're not in front of 40 people," she told Harper's Bazaar.

Speaking of sex, the Netflix series will also include the mystical Grigori Rasputin (Ben Cartwright), whom audiences will likely recognize if they watched the 1997 animated film, Anastasia. The self-proclaimed holy man had a lecherous reputation, according to Britannica, and had numerous mistresses. Not only was Rasputin Alexandra's personal advisor, per the Smithsonian Magazine, but he was rumored to have had an affair with her. He's also said to have alleviated young Alexei's hemophilia, per Britannica, though the specifics are unclear.

Audiences also see a snippet of Alexandra and Nicholas's daughter, Anastasia, who was rumored to have survived (the plot of the 20th Century Fox film). However, Russian history buffs will recall that the royal family was imprisoned by the Bolsheviks — or a political faction of the Russian Social-Democratic Workers' Party, which was led by Vladimir Lenin. Per National Geographic, the royal family was executed in Yekaterinburg in July 1918, and there were no survivors.

And while these horrific events happened over 100 years ago, it's still a compelling piece of history and one which promises to make an exciting TV show. "There's such relevance to [The Last Czars] today; it was relatively recently that that Romanov family became saints in the Russian Orthodox church," Herbert told Harper's Bazaar UK. "They were considered martyrs and I visited the Orthodox church where we filmed, and church-goers were praying to the icons of the character I was about to play, and it really brought home to me how this isn't just history — it has repercussions in religious and political life even today."

So whether or not The Last Czars returns may depend on how much history they cover in Season 1 as well as how the series is received. The show contains six episodes, and perhaps that's all they'll need to recount how the first 1900s Russian tsar was also its last.