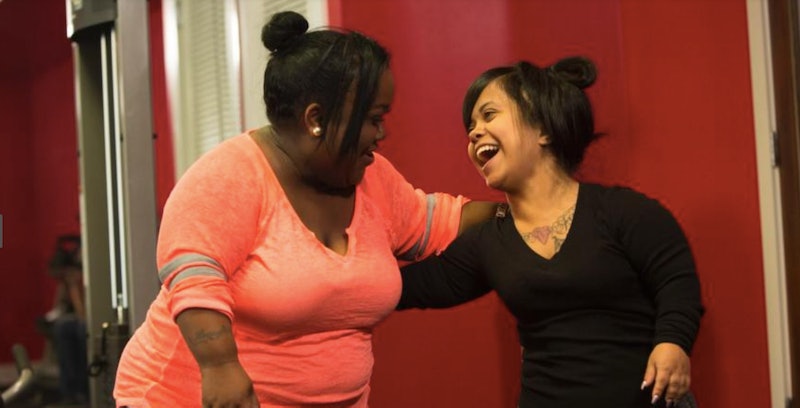 With the Season 3 finale of Little Women: Atlanta on Wednesday night, fans may be worried since there's been no official word from Lifetime about renewal for Season 4. But they don't necessarily have to be. For the past few seasons, the network has held off announcing renewals until after the current season ends, so this isn't totally unlike Lifetime. Right now, the future of the Little Women: LA spin-off could go both ways as its fate remains unknown. However, there are more reasons than not to believe the spin-off will get picked up for Season 4.

The reality series stars "little women" Tiffany "Monie" Cashette, Ashley "Minnie" Ross, twins Andrea and Amanda Salinas, Shirlene "Ms. Juicy" Pearson, and Samantha Ortiz and Tanya Scott (who replaced Emily Fernandez and Bri Barlup after moving to Little Women: Dallas). None of the women have yet commented on social media, but the lack of insight leads me to believe there's more drama underway that's being kept under-wraps, especially with what's about to go down in the Season 4 finale.

The promo for Wednesday night's episode teases at a crazy-dynamic finale with one of the Salinas sisters possibly relocating to Dallas and Monie building up the courage to propose. Not that fans would know any of that from social media.

None of the women have posted anything that could give finale spoilers (or further storylines away), keeping fans on their toes. While Andrea Salinas and Tanya Scott seem to be enjoying a low-key mom life, their co-stars Samantha Ortiz and Minnie have been posting vacation pics and just being out and about. They clearly don't want fans to know what's coming, in the Season 3 finale and beyond.

Plus, the show has numbers on its side. Season 1 premiered with 1.3 million viewers, making it Lifetime's most-watched unscripted series premiere in over five years. Season 3 was holding strong, still gathering 1.3 million viewers for the season premiere, taking in a slightly higher number of viewers than Season 2. So hold tight, LW fans, these women could be back to bring the drama for a fourth season.

More like this
'Who Killed Sara?' Won’t Return For Season 4
By Brad Witter
Everything To Know About 'RHONJ' Season 13
By Brad Witter
There's Plenty Of Drama Brewing To Warrant A 'Summer House' Season 7
By Brad Witter
The Richest 'Bling Empire' Cast Member Is...
By Hugh McIntyre
Get Even More From Bustle — Sign Up For The Newsletter