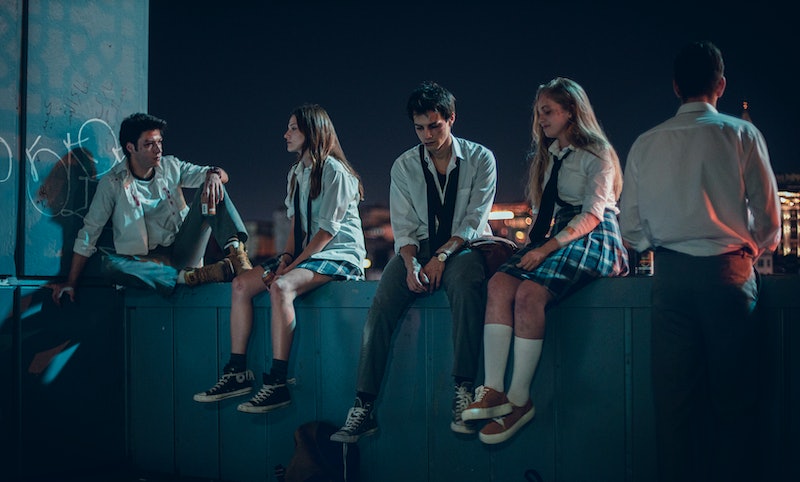 Given how much controversy Netflix's new Turkish drama, Love 101, stirred up before it even premiered, there will likely be a lot of scrutiny surrounding a potential Season 2. The show follows a group of rebellious high schoolers in 1990s Turkey who try and fix up their teacher, Miss Burcu, with the basketball coach. Their motivations aren't entirely pure — if Burcu leaves school, the students will be left at the mercy of the remaining strict faculty — but their meddling isn't why Turkish viewers are upset.

According to Reuters, thousands of Turks have taken issue with the fact that there may be a gay character in the show, prompting calls for a boycott in the country. "We will not tolerate broadcasts that are contrary to the national and spiritual values ​​of our society,” Ebubekir Sahin, president of the Radio and Television Supreme Council, told the Turkish newspaper Yeni Akit, per Reuters. Netflix Turkey also made its own statement, seemingly downplaying the rumor: "A lot of false information is spreading from fake accounts ... believe only what you hear from us about the series and the characters, not the rumours [sic]."

Homosexuality is not illegal in Turkey, but the country is deeply and sometimes dangerously conservative. Its pride parade has been canceled for five years in a row, and after the 2016 shooting at Pulse nightclub in Orlando, Florida, Turkish fundamentalist newspaper Yeni Akit printed the news on their website with the translated headline, "Death toll rises to 50 in bar where perverted homosexuals go!" per the Daily Mail. Reuters reports that the Turkish government says it has taken steps to improve equality, but a 2019 report on LGBTQ+ rights from the advocacy group ILGA Europe still ranked Turkey second to last out of 49 countries.

Will the backlash deter Netflix from renewing Love 101? In the past, the company hasn't shied away from controversy: despite widespread criticism, they renewed both 13 Reasons Why, which included a graphic depiction of suicide that wasn't removed until two years after its premiere, and Italian series Baby, which centers around teen sex workers.

Netflix hasn't yet confirmed if there is, in fact, a gay character in Love 101, but if there is, renewing the show in the face of controversy could be a really powerful way for the company to take a stand against homophobia. Would it be the smartest choice, financially? Potentially not, depending on viewership. But it would be the moral one.