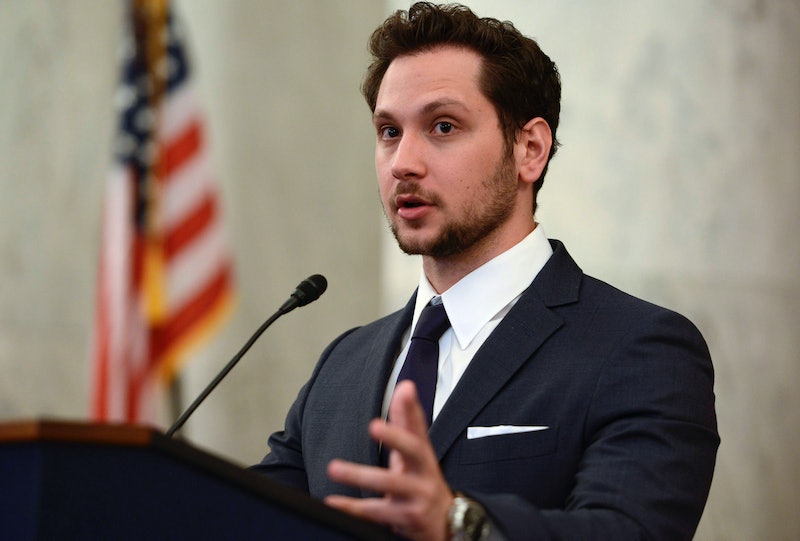 Dozens of major celebrities are attending the Women's March on Washington, organizing, participating, or speaking in the event. Stars like America Ferrara, Amy Schumer, Zendaya, Scarlett Johansson, Uzo Aduba, and more are attending, but they're not alone — there are plenty of male allies, too, going to the March. But how about the man who is, perhaps, the most publicly woke male ally of them all? Will Matt McGorry be at the Women's March on Washington?

It's definitely possible. McGorry, who told Adweek that he became a feminist after he read Lean In, has been making public statements about his belief in the importance of gender equality for a while now. His social media profiles include references to intersectional feminism, and he posts regularly about feminist books he's reading and beliefs he's been pondering. Some of his most notable statements include a much discussed Facebook post from 2015 wherein he announced proudly that he was a feminist, as well as an article he wrote for Cosmopolitan called "How Becoming a Feminist is Like Falling in Love."

Some of his tweets and Instagrams could be considered a bit on the thirsty side, such as one photo where he showcases a very heavily-emphasized "TEMPORARY" tattoo of a uterus and an oh-so-casual fireside shot of sex-positive book She Comes First. And McGorry has also caught flack for talking the talk but not always walking the walk, such as when he argued with a woman who criticized his approach to feminism.

But, though criticism for McGorry in these situations is definitely warranted, it's commendable that the actor is taking important steps in the right direction when it comes to embracing feminism. For example, he's constantly reading books about racial and gender injustice, and he posts highlighted pages of the books that show he's genuinely reading them and thinking about their content. Sure it's a little show-off-y, but I'll take as much hard evidence as possible that the men in my life are actually listening to what women are saying.

He also does the work of showing up. McGorry has been present at Black Lives Matter and Standing Rock protests, and he used his celebrity power to bring attention to those issues while also not dominating or shutting down the voices of the movement. McGorry also, as referenced in a Broadly interview, partnered with President Joe Biden and It's On Us to give a speech about sexual assault prevention at The University of Pittsburgh. That's a lot more work than most celebrities put into their "activism."

And McGorry even takes on the challenge of fighting with men who say sexist things, such as when he challenged Piers Morgan about his racism and misogyny. So many men want to call themselves feminists, but then keep quiet and refuse to call out the other men in their lives when they say or do something sexist. McGorry being willing to take on the work of fighting with those men, allowing women the occasional break from the constant onslaught of defending themselves, is something that I appreciate.

Frankly, in this day and age, I'll take as many Matt McGorrys as I can get, and hopefully, he'll be on the front lines at the Women's March showing his support.