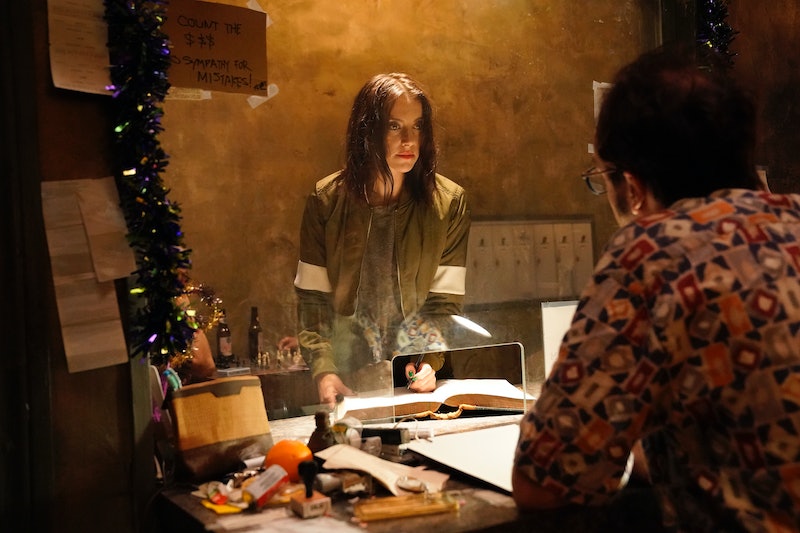 Spoilers ahead for Cloak & Dagger’s “Shadow Selves” episode. Tandy and Tyrone are way in over their teenage hero heads as they get their first taste of Mayhem. O’Reilly’s dark twin is tearing New Orleans to shreds as she murders pretty much everyone she encounters to find Connors as well as the missing girls who are a part of a horrific human trafficking ring. Her reign of terror quickly came to a halt when Tyrone used his powers to trap her in a dark realm. But, will Mayhem escape the Darkforce dimension? This certainly isn’t the end of her story.

In the episode, Tyrone, Tandy, and O’Reilly discover that Mayhem splintered from O’Reilly when she was shot last season, so they share DNA and memories, but Mayhem is hyper-violent with zero moral compass. Tyrone tells Tandy that Mayhem’s “shoot first, ask questions later” mentality was what led to his brother’s police death shooting years ago, but Tandy says Mayhem is right to take out people who are involved in a trafficking ring.

Mayhem shows up during Tyrone and Tandy's rescue mission and nearly shoots an innocent young boy, but Tyrone steps in front of him and swallows Mayhem into the Darkforce. Tandy looks horrified but remains silent as she stares at Tyrone. At the end, Mayhem is walking in a dark place when she goes to the image of a gas station. She finds a seemingly alive Fuchs, who asks her if she is up for those pancakes. Umm, what?

It’s not clear if this strange reunion at the end means that Fuchs is somehow still alive or just a figment of Mayhem’s imagination. But, the real question is how Mayhem will get out of this dimension. So far, her powers seem to be her ability to slit people’s throats with her fingernails and superhuman strength, but there’s no indication that she can teleport or has any other power to get out of the dimension. One thing is for sure - it can't be easy because Connors has been MIA for months.

Per FANDOM, comic Mayhem actually works with Cloak and Dagger to stop corruption, so perhaps Tyrone will bring her back so they can use her help. O’Reilly has lost her shooting skills and general backbone since the splinter, so the heroes will need all the help they can get. Showrunner Joe Pokaski confirmed to TV Guide that Tandy will go into Tyrone's cloak this season, so perhaps she is going in to find Mayhem. The same interview also revealed that Mayhem's Season 2 story arc will dive into just how far a person should go to get needed results. So, it definitely looks like Mayhem will be around for more episodes.

Tandy’s daggers dissolve in her hands, but the threat of being sent back into the Darkforce dimension might be enough to make Mayhem tone down her bloodthirsty rage to be an ally. Or, maybe there is something deeper and darker in this world that will aid her escape.

Until then, fans will be filled with questions. What’s the deal with Fuchs? Is Connors still somehow alive in this dimension? Will Mayhem become a full-fledged villain or an unlikely asset for this heroic duo? And, will Tyrone’s decision to trap Mayhem somehow come back to haunt him? The answers to Mayhem’s fate will be revealed as Season 2 continues to unfold.

More like this
Emilia Clarke Shares More Details About The New 'Game Of Thrones' Series
By Maxine Harrison
“The Door Is Always Open” For Another 'Breaking Bad' Spin-Off, Says AMC Boss
By El Hunt
Everything To Know About The Flash Season 9
By Brad Witter
Here's Why You'll See Less Of Olivia Rodrigo In 'HSMTMTS' Season 3
By Bustle Editors
Get Even More From Bustle — Sign Up For The Newsletter