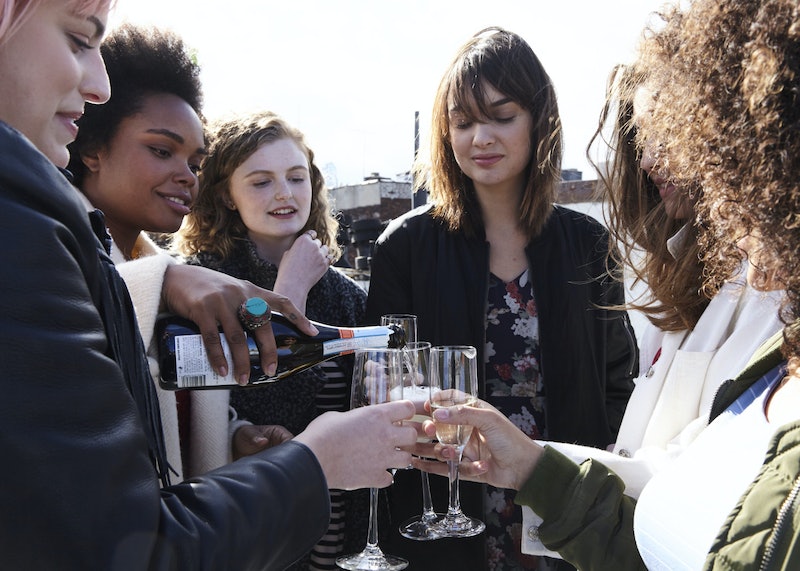 The holidays are amongst us, but so is Mercury retrograde. This doesn't mean you have to put away your twinkling lights and cancel all of your plans. If you're wondering how will Mercury retrograde affect 2017 holiday parties, I have good news for you. Santa won't get wedged in the chimney, or anything like that. While a retrograde Mercury has a bad reputation, it could be the prime time to host a hometown holiday party.

From Dec. 3 through Dec. 22 the ruling planet of communication will be kind of out of whack. During a retrograde it's not uncommon to find pesky errors lurking in just about everything that you do. GPS apps that detect traffic patterns might glitch and direct your car to the most congested route. Or, switch up your directions mid-drive to a totally new destination. (Hey, it has happened.) Thankfully these are things that can be corrected.

And just as with traffic blunders, any little error surrounding holiday parties can be fixed in no time. Don't let the imminent and silly little mistakes that tote along with a retrograde Mercury stop you from completely getting to the party. Just plan ahead as much as possible, because it might take you a little longer than expected to arrive.

What exactly is Mercury retrograde and why can't you do seemingly anything, according to astrologers advice, during this time? Mother Nature Network describes the planetary funk as, "mov[ing] in an opposite direction to planet Earth. Planets move from east to west around the sun, and when Mercury turns to move from west to east instead, that's when Mercury is in retrograde." Since Mercury is a planet that rules over communication and travel, these crucial aspects of our lives may feel a little ... slow.

In terms of all those great holiday parties you're planning on making an appearance at, first make sure you have your transportation checked out. More often than not during this time modes of travel can be delayed. Because it's also a time when ~everyone~ is on the road trying to make it to Grandma's house for a platter of cookies or latkes, highways are likely to be congested. Leave early to make sure you're not arriving too late. If you're hosting a party, prepare for some stragglers. Car traffic might not be your problem, but relying on the train's schedule operation could lead to some frustrating delays. Just think of a late arrival as a grand entrance.

Your twinkling string of lights might flicker, or you can forget there's a roast in the oven between hosting duties. Just take a deep breath. You don't need an electrician on hand. Little things can be avoided by taking necessary precautions. Plug your lights in before guests arrive. If there's a faulty bulb, switch it out so it doesn't affect the whole string. Take a deep breath when it comes to cooking. Set a timer. The beauty of Mercury retrograde is that it forces us to be more conscious and aware of what we're surrounded by. This is a great time for sharper observation.

One habit a Mercury retrograde has a penchant for is re-introducing old friends back into your life. So, if you're home for the holidays, it's possible to find yourself circulating your old stomping grounds and running into familiar faces. If you're the party host, and just got a random friend request from someone you sat next to in ninth grade algebra, you might want to think about inviting an old friend over. Who knows, they might've just moved into town and are looking to rekindle a friendship. This is the perfect time to re-connect.

The end of the year is busy for everyone. Taking a moment to get together with a bunch of people who you've been meaning to catch up with — whether everyone is late or not — is a great idea. And, as it turns out, that is exactly what Mercury retrograde intends to do. Stay calm during any slight mishaps at the holiday party. The cookies will still be served and even better, surprising reconnections will be made during a merry time.