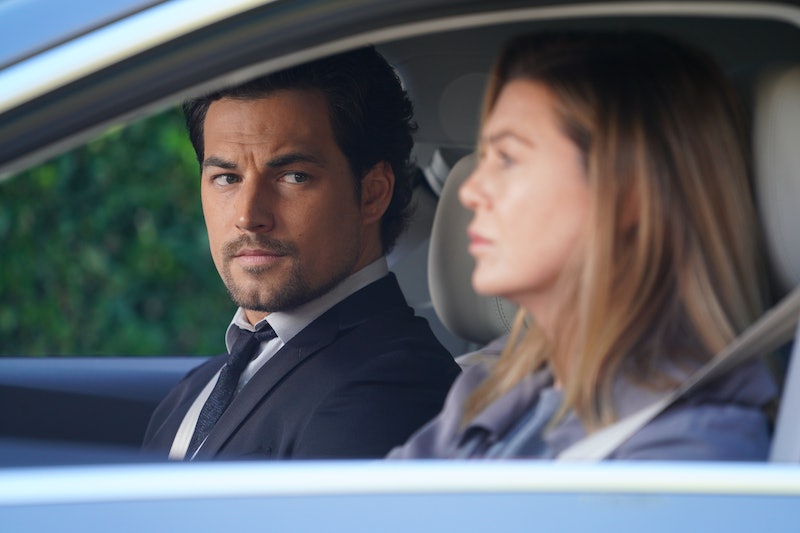 Two incredibly handsome surgeons fighting for your attention? What's a woman to do?! Meredith Grey has faced a lot of challenges over the course of her career, but this might be the most challenging of them all. Now that Cristina's "present," McWidow has arrived in the midst of some of their relationship drama, some fans are worried that Meredith and DeLuca will break up on Grey's Anatomy. Or can Mer and Andrew make it through their current rough patch intact? Meredith's love life hasn't been this agonizing since she was begging Derek to "pick me, choose me, love me" way back in Season 2.

The current turbulence between Meredith and Andrew started during Mer's big trial episode, when she confessed to him that she wasn't sure they would make it as a couple if her license was revoked. She couldn't watch him continue being a surgeon if she wasn't allowed to be one, she admitted. Andrew was dismayed that Mer apparently didn't think their relationship was strong enough to survive such a trial — even after he literally went to jail for her in the Season 15 finale — and asked her to take some time to think about what she wanted from their relationship.

A bit unfairly to Andrew, this request was interpreted as him "dumping" Meredith when, in my opinion, he couldn't have been clearer that he wanted to be with her — he just wanted her to be sure she felt the same! After a couple episodes of distance, Meredith seems to be drifting back toward Andrew, admitting (in Italian, no less!) that she misses him. But she's also seen what else there is on offer while they've been apart, and if Dr. DeLuca's emerging medical mystery comes between them, could Dr. Grey end up opting for Option B after all?

Option B is pretty attractive, pun intended. He's confident, he's a leader in his field, and he knows the pain of a losing a spouse, just like Meredith. Those twinkly eyes and that Irish accent don't hurt, either. Neither does the recommendation from Cristina Yang, Mer's long-distance "person," who is the human being she probably trusts most in the entire world. If what Meredith's worried about most when it comes to her relationship is being professional equals, then an attending like Cormac Hayes certainly fits the bill better than a resident like Andrew DeLuca.

But Meredith has already proven that she doesn't need to be professional equals to be in a loving, successful relationship; she was only an intern when she met Derek, and they went on to be happily married for many years and raised several kids together, all while pursuing their own professional careers and ambitions. (Sure, that occasionally led to friction, but they always managed to work things out eventually.) If Meredith has the patience to let the other person in the relationship be the less confident, less experienced one — as she was when she entered her relationship with Derek — then there's no reason that things can't work out between her and Andrew.

A year ago, when fans were still in the midst of the Meredith-Andrew-Link love triangle, Ellen Pompeo made it fairly clear that her character had made up her mind about her romantic future. "Meredith has chosen DeLuca," the actress told E! News back then, cutting right to the point. Of course, Meredith is always entitled to change her mind and make a different choice — but it's more likely that McWidow is one of those wrenches that nighttime soaps have to throw in every now and then to keep things interesting, and that Meredith and Andrew will emerge on the other side of this hiccup even stronger than ever.

To be clear, it's not going to be smooth sailing for them. It looks like the case of DeLuca's mysterious patient will be occupying a lot of their time and energy over the next few episodes, and causing even more strain on their relationship. The press release for the Feb. 20 episode, "A Diagnosis," ominously teases that "Meredith and DeLuca's disagreement over a patient further complicates their relationship," and that Andrew is "irritated" after Meredith "takes over" Suzanne's care.

But these two have already declared their love for each other and weathered some crazy storms, including separate prison sentences for both of them within the space of a few weeks. Meredith and Derek's disagreements only ever brought them closer — once they had worked their way through them, of course — and while McWidow provides a very pretty distraction during their current relationship woes, there's no indication that this Grey's guest star is anything other than that.

If they announce that actor Richard Flood has been promoted to a series regular? Well, then DeLuca might want to start watching his back…

More like this
Shonda Rhimes Responded To The Surprise Exit Of A Day 1 'Grey's Anatomy' Figure
By Grace Wehniainen
'That '90s Show' Is Officially Coming Back For Season 2
By Gretchen Smail and Grace Wehniainen
The Plane Crash In 'Dear Edward' Is Based On A 2010 Tragedy
By Grace Wehniainen
Keyla Monterroso Mejia Is Finally The Star Of The Show
By Gabrielle Bondi
Get Even More From Bustle — Sign Up For The Newsletter
From hair trends to relationship advice, our daily newsletter has everything you need to sound like a person who’s on TikTok, even if you aren’t.