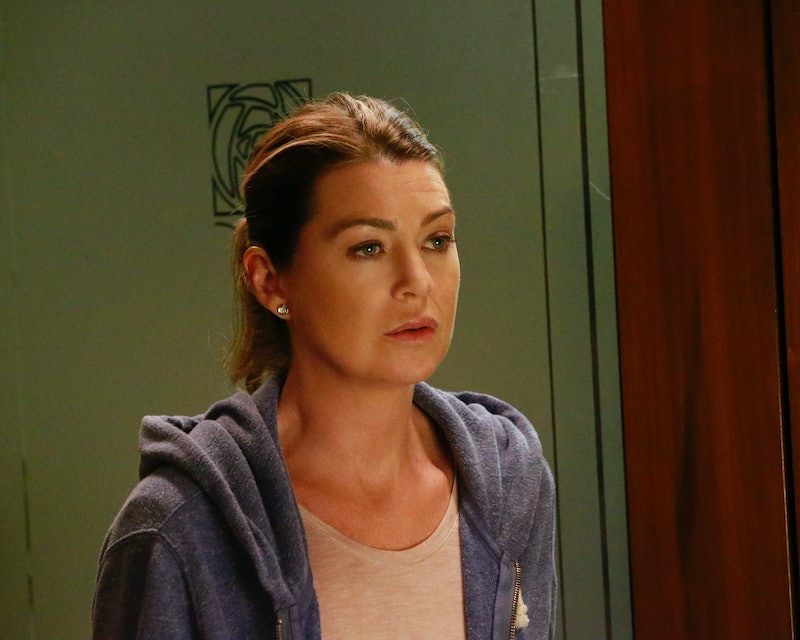 Is it really an episode of Grey's Anatomy if one of the doctors doesn't do something ethically ambiguous or straight up illegal in the name of saving someone's life? Not really. Meredith committed insurance fraud on Grey's Anatomy on the May 2 episode, and it could cost Mer her job. This kind of thing has happened before but given that it's almost the end of the season, it's not totally out there to wonder if her impulsive behavior will finally lead to Meredith getting fired on Grey's Anatomy Season 15?

See, it's important to ask this question only of this season so as not to get it confused with all the other seasons that Meredith could have/should have/was fired. That's right, Meredith has actually already been fired on this show. In 2011, her character tampered with Derek's Alzheimer's trial and got caught. As a result, she lost her job at the hospital. Shortly after, Chief Webber (falsely) claimed responsibility and stepped down as chief so Meredith could get her job back. She also got suspended in 2017 for taking Webber's side over Eliza Minnick's in regards to who got to teach the interns. Getting fired/suspended is old hat to Meredith now.

In the May 2 episode, Meredith faked the insurance forms for a young girl who was seeking asylum so that she could have a life-saving surgery. Meredith used her daughter's name on the forms, since her child had insurance to cover the procedure. She was caught by Webber, and he was not happy. Now, the May 9 episode looks to pick up where we left off, with Chief Bailey and Catherine Fox in a serious meeting. According to the episode synopsis on the press site, they're holding the meeting "to get down to the bottom of an insurance issue." Sure, it could be a different insurance issue, but it's probably Meredith's.

The trailer for the episode has Meredith dressed in street clothes and not a lab coat — so perhaps she was put on leave? She says, "I need to talk to Bailey." DeLuca advises, "I would not do that."

It's unclear whose side Bailey and Catherine are on. Hopefully they're advocating to the board/ethics team for Meredith to stay, since she was just doing what she had to in the moment to save a child. But Catherine and Bailey are both rule followers, and they could be on the side of firing Meredith over what is, essentially, a crime. They both look pretty angry in the promo photos for the episode.

The outcome of the meeting may not be in Meredith's favor, especially since Webber says "nothing good" is happening in the meeting room. Meredith's intern is also shown looking in on the proceedings with a concerned expression.

The Grey's Anatomy official Twitter is teasing an emotional episode that will "have you feeling ALL THE FEELS." Is that related to what could happen to Meredith?

Whatever does happen, it may not be resolved before the Season 15 finale on May 16. The promo pictures for the following episode show that Meredith is still in the same street clothes outfit and Bailey and Catherine are still in their meeting. Webber and Alex stand with Meredith, all of them looking concerned.

It is the finale, so the writers may choose to make Meredith's fate a cliffhanger to keep fans talking during the summer hiatus. Even if Meredith does get fired, though, don't expect it to last for long. Just think about all the things these doctors have done over the years that would be considered improper conduct. They've all been fine time and time again. This is Grey's Anatomy, Grey isn't going anywhere long term.

Ellen Pompeo, who plays Meredith, has suggested that next season — Season 16 — could be the show's last. There's no way, then, that the writers bench Meredith for her final season on the show. If Grey's is going to end, it's going to end with Meredith at the hospital she loves, in her scrubs, saving lives.

This is just a speed bump for the surgeon, and she's bound to be back soon.

More like this
Shonda Rhimes Responded To The Surprise Exit Of A Day 1 'Grey's Anatomy' Figure
By Grace Wehniainen
Here’s What Happens To Bill & Frank In 'The Last Of Us' Video Game
By Brad Witter
Michael B. Jordan Tackled His "Public Breakup" With Lori Harvey On 'SNL'
By Brad Witter
Everything To Know About A Potential 'Lockwood & Co.' Season 2
By Gretchen Smail
Get Even More From Bustle — Sign Up For The Newsletter
From hair trends to relationship advice, our daily newsletter has everything you need to sound like a person who’s on TikTok, even if you aren’t.