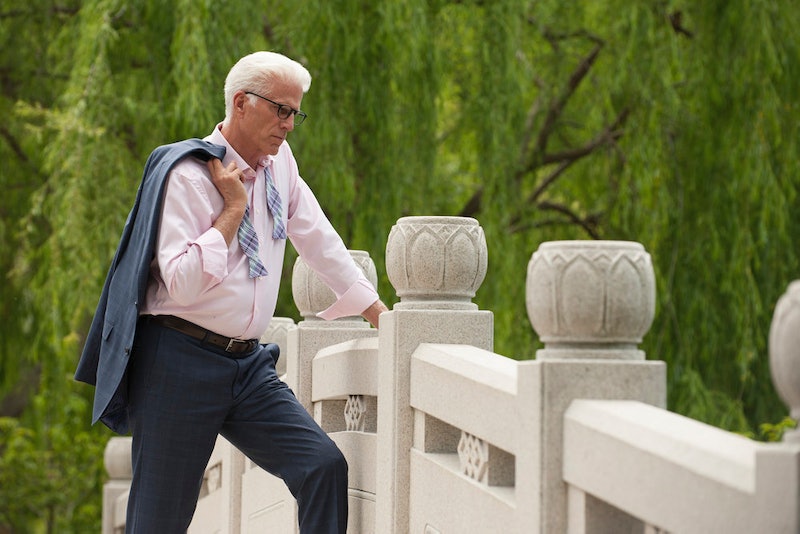 Spoilers for Season 2, Episode 3. Although The Good Place revealed that Michael is an architect for the Bad Place, it's still difficult to believe the outrageously affable Ted Danson is playing an evil character. Maybe there's a chance for Michael to become good on The Good Place after Chapter 16, "Dance Dance Resolution." He has already broken all the rules set by his Bad Place boss Shawn by pretending he's still on attempt #2 of his torture experiment with Eleanor, Chidi, Tahani, and Jason when he's really on attempt #802. So with his continued failures in mind, the rest of the Bad Place torturers going on strike, and the real Eleanor — aka dissatisfied Bad Place employee Vicky — blackmailing him, Michael teams up with Eleanor and the rest of the humans on The Good Place. And this decision could redeem the Bad Place architect for real.

Although his goal and job is to make "humans' lives miserable for eternity" in an innovative way, Michael is kind of in his own personal hell by continuing to fail in his experiment. It's slightly odd though since, as Chidi notes, Michael is succeeding in some ways. After all, by constantly rebooting Eleanor, Chidi, Tahani, Jason, and Janet (let's not forget TV's favorite omniscient information delivery system), he has put the humans in a "warped version of Nietzsche eternal recurrence." As Chidi says, "We are experiencing karma, but we can't learn from our mistakes because our memories keep getting erased. It's an epistemological nightmare." Or, in less philosophical terms, it's hell.

However, Michael is more concerned about what his boss Shawn thinks since the traditional Bad Place route is to use regular old torture methods rather than elaborate mind games. In that way, he is failing and Vicky is threatening to expose just how unsuccessful his torture method is. In this moment of desperation, Michael confides in Jason, who surprisingly inspires Michael to join forces with the humans in order to take down the disgruntled Bad Place torturers. Who'd a thunk that a dance crew story could be what saves Eleanor, Chidi, Tahani, and Jason from their hellish loop existence?

Although Eleanor is the only human to consistently realize she doesn't belong in the Good Place, the show does make viewers question what can lead someone to end up in the Bad Place. Eleanor, Chidi, Jason, and Tahani lived drastically different lives when they were alive, but all of them ended up in the Bad Place for varying transgressions. And since Eleanor does learn from her mistakes, even with the rebooting, that may be proof that these four people don't deserve to be in the Bad Place for eternity. If Michael spends more time with these humans and gets to understand them better, would he help them escape the Bad Place? And would that make him good?

Because she is the protagonist — and is played by another affable actor, Kristen Bell — viewers root for Eleanor, even though she wasn't a great human and has been sent to the Bad Place for it. And the fact that she has found love with Chidi, a revelation that is unveiled in a low-key way in "Dance Dance Resolution," seems to prove there is a way for these humans to evolve and become better people. As Michael is on the cusp of being ousted, he may just be vulnerable enough to realize that and want to save these four from being constantly tortured.

As Janet actor D'Arcy Carden confirmed to Bustle, The Good Place will continue to be as unpredictable and smart as ever in Season 2. That makes it difficult to guess where Michael's alliance with the humans will go. But as it seems unlikely that Shawn isn't already aware of the fact that Michael's scheme is failing, his Bad Place shenanigans against Eleanor, Chidi, Tahani, and Jason may be coming to an end no matter what. That means The Good Place will most likely be giving viewers more unexpected twists as the series continues. Considering the gang is in hell, it's probably a little too optimistic to wish that one of those twists means a kinder, gentler Michael, but if Eleanor can win over Chidi enough for him to profess his love for her, well then, there's hope she can win over Michael too.