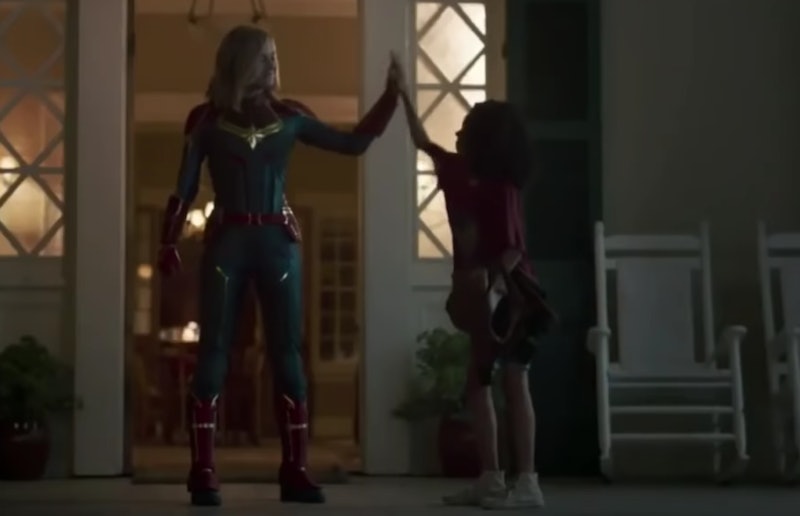 Mild spoilers ahead. Marvel fans scrambled into theaters last weekend to see Captain Marvel, not only to see Carol Danvers's origin story but also hoping to get some clues about the future of the MCU. While fans were most likely watching closely for references to the Avengers or the Infinity Stones, Monica Rambeau (Akira Akbar), Carol's best friend's daughter, may be the most important Easter egg of them all. She's hugely important in Marvel comics and would be an adult in the prime Avengers timeline. So will Monica Rambeau will be in Avengers: Endgame? It seems unlikely, but it could be the shocking twist that Avengers 4 needs.

Captain Marvel is set in 1995, when Monica is 11 years old. That means that Maria's daughter will be 24 years older in Endgame, which will most likely take place in present day for at least part of the film, like Infinity War. As The Hollywood Reporter suggests, Monica Rambeau could show up in the next sequel as a full-blown superhero, to help her mom's best friend and the Avengers defeat Thanos in round two.

The only problem there is, well, Monica Rambeau is important to Marvel comics history because she carried the mantle of Captain Marvel too.

The MCU's choice to have Carol Danvers be their Captain Marvel came as a surprise to some fans considering that, when she first appeared in the comic books in 1968, was a human. She only became the superhero known as Captain Marvel in the comics in 2012. Before then, Carol used a few superhero names, going by Ms. Marvel for the longest period of time. The origin Captain Marvel was the the Kree alien Mar-Vell (played by Annette Bening in Captain Marvel) — originally a man.

After Mar-Vell died, Monica Rambeau became the second superhero in to use the name Captain Marvel, who in her normal life, worked for the New Orleans harbor patrol. Eventually, Monica relinquished the title to Mar-Vell's offspring, choosing to then go by the name Pulsar. She had numerous aliases in the comic books after that, eventually landing on the name Spectrum, which is her current alias in the comic book team, the Ultimates.

Per Collider, Brie Larson reportedly has a seven-picture deal with Marvel, so she is likely sticking around as Carol, and thus, there's very little chance that Monica Rambeau will appear in Endgame as Captain Marvel. But perhaps she would be known as her current Marvel comics character name, Spectrum. Neither Monica Rambeau nor Spectrum show up as characters names on the IMDb page for the next Avengers, which could hint that Monica's return will happen post-Endgame. Or her appearance might be one of Endgame's likely many huge surprises.

In an interview with Rotten Tomatoes, Lashana Lynch, who plays Maria Rambeau, said that the future for Monica's character remains unknown — at least to her. "I honestly don’t know. I feel like there’s, there’s always some things in the works when it comes to the MCU, and there’s always things changing. They go by the comics, but they also switch things up sometimes to keep us on our toes," Lynch said.

Of course, heads turn too to Marvel Studios president Kevin Feige for any clues about whether or not Monica will make an appearance, but the head honcho has kept quiet about the possible inclusion of Spectrum. In an interview on Variety's podcast, Playback with Kris Tapley, Feige only hinted that Endgame will have some twists. "It was always about delivering on the promise we had set up," Feige said, according to CBR. The Marvel president then said the fourth Avengers movie will focus on "delivering on expectation but in unexpected ways."

Since Monica doesn't have a large part in Captain Marvel, it might make sense that her superhero character get a formal introduction in the mysterious Phase 4. Her turn as Captain Marvel in the comics made her the first African-American woman to both join the Avengers and also become a leader. Avengers: Endgame is going to be busy enough already and might not be the best time to establish the character's importance. It's very likely, however, that fans will meet a grown-up Monica at some point down the MCU line.