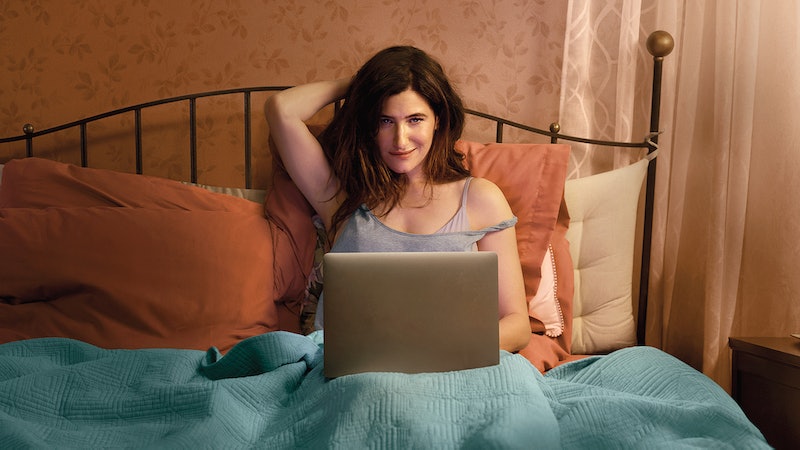 Despite its limited-series run, HBO’s Mrs. Fletcher just might return for Season 2. Based on the bestselling novel by Tom Perrotta, Mrs. Fletcher follows single mom Eve Fletcher (Kathryn Hahn) who experiences a newfound sexual awakening after her son Brendan (Jackson White) goes off to college. But in the finale, Brendan walks in on his mother at a pivotal point in this awakening: the middle of a threesome. The series ends with mother and son, silent, on the front porch of their suburban home. While HBO hasn’t picked up the series for Season 2, Perrotta and Hahn expressed enthusiasm for a follow-up to that awkward conclusion.

In an interview with IndieWire on Dec. 8, Perrotta, who also served as executive producer on the show, suggested that there’s much more to be told. “This ending is an ending of an arc, not an ending of a life," he said. "So, yes, I think there’s more room.” Perrotta, who also penned the book The Leftovers adapted into the 2014 HBO show, added, “One thing I learned from The Leftovers was to just treat every season as if it were the last. But yes, there’s more to tell if that opportunity arises.”

While Mrs. Fletcher was picked up by HBO as a limited series, a second season return is still possible. Big Little Lies, the limited series based on the novel by Liane Moriarty, unexpectedly returned for a Season 2 after massive fanfare, after all. Like the latter series, Mrs. Fletcher has received acclaim online. Coined as a “raunchy but sweet” tale “for the ages” by NPR, Perrotta’s source material has been hailed for its narrative of a sexually-liberated 40-somethin'-year-old woman.

Hahn appears to be the ideal Eve Fletcher, too. In September 2017, she penned an open letter in Glamour to let her younger self know that at age 44, “life just gets sexier.” Hahn wrote, “At 44, you will realize something astounding: Life just gets sexier and sexier. Your sexual self will become this enormous, loud thing that you no longer take for granted, no ­longer deny. You will refuse to put a lid on it. You will listen to it. My God, you will hear it roar."

Mrs. Fletcher is available to stream on HBO.

More like this
'Wednesday' Star Emma Myers Thinks A Wenclair Storyline Is “Possible” In Season 2
By Alyssa Lapid
Here’s Why Danny Masterson’s Hyde Isn’t In 'That '90s Show'
By Brad Witter
'The Crown' Season 6 Has Suspended Filming "Out Of Respect" For The Queen's Death
By Bustle Staff
'The Queen’s Gambit' Season 2 Tweet Wasn’t From Anya Taylor-Joy
By Mary Kate McGrath, Jack Irvin and Grace Wehniainen
Get Even More From Bustle — Sign Up For The Newsletter
From hair trends to relationship advice, our daily newsletter has everything you need to sound like a person who’s on TikTok, even if you aren’t.