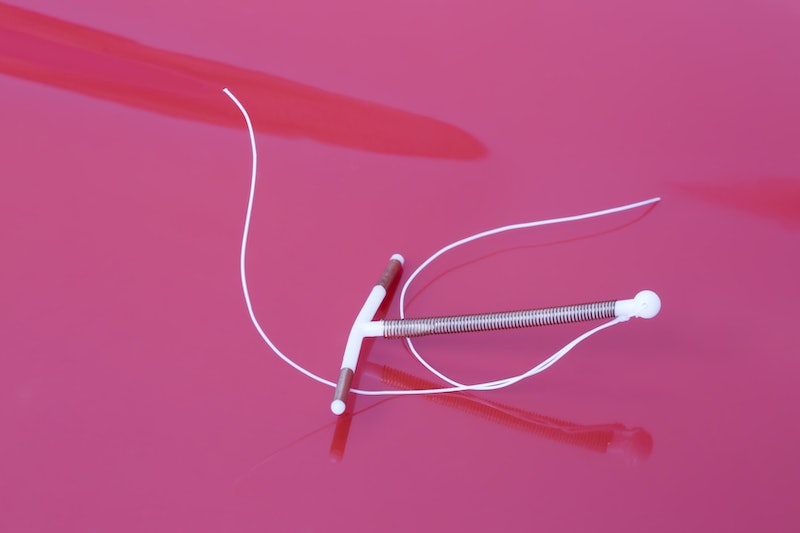 You’ve just gone through the process of having your IUD inserted. You’re back home. You’re hanging out. And… You have to poop. Suddenly the thought flashes through your mind: “Is it possible for my IUD to fall out from pooping?” It’s a scary thought, and one that many people have after an IUD insertion. After all, you’re bearing down on muscles in your pelvic region. Couldn’t it be possible that your IUD will fall out when you poop?

“Generally the IUD is lodged at the top of the uterine cavity or the fundus, so having a normal bowl movement would not cause the IUD to be dislodged or displaced,” Dr. Michael Krychman tells Bustle.

In order to understand why that it is, let’s take a look at how the IUD is actually placed inside the body. Unlike a tampon (which many of us definitely have pushed out while pooping) which stays in the vagina, the IUD sits past the cervix and in the uterus. In fact, if it’s properly in place, it should sit right at the top of the uterus, with strings hanging out through the cervix and into the vagina. That means it’s really far from the opening of the vagina, with the cervix in between.

You might be thinking, “But a baby can be pushed out of the cervix and an IUD is much smaller than a baby!” And you’re right: Babies do come through the cervix during childbirth. However, the cervix also opens during childbirth, in order to let that baby get through. In your normal, everyday life (you know, when you’re not having a baby), your cervix is not only closed but actually has mucus blocking the very small opening it does have.

Many women report issues with constipation immediately after having an IUD inserted, which increases the fear that they might push the IUD out. After all, if you’re bearing down really hard when you poop, it seems like you could bear down hard enough to push it out. But the anatomy simply doesn’t work that way, so it’s not likely.

One of the reasons people are so nervous about an IUD falling out when they poop is because an IUD can expel. Expulsion happens in between two to 10 percent of cases and doctors aren’t totally sure why some IUDs expel and others don’t. There are theories that it could be related to heavy periods, improper placement after insertion, the person with the IUD not having had a child yet, or young age. It’s also reassuring to know that usually if an IUD is going to expel, it happens within the first few months. So if you’re past that point, you’re probably OK.

There is one circumstance where pooping might help push out an IUD, however.

“If for some reason the IUD happens to be misplaced or dislodged and is in the cervical canal or partly in the vaginal area,” Dr. Krychman says. “Then its feasible that when you strain, and increase your abdominal pressure with a strong valsalva you may dislodge the already dislodged IUD.”

So basically, if your IUD is already dislodged, pooping might help push it out further. But if it’s in the correct place (as the majority of IUDs are) after insertion, you should be fine.

If you’re concerned about the placement of your IUD after insertion, make sure you’re regularly checking for the strings. Your health care provider should tell you how and how often to check, but as long as those strings are still where they’re supposed to be, you can cross worrying about pooping off your list of IUD-related concerns.