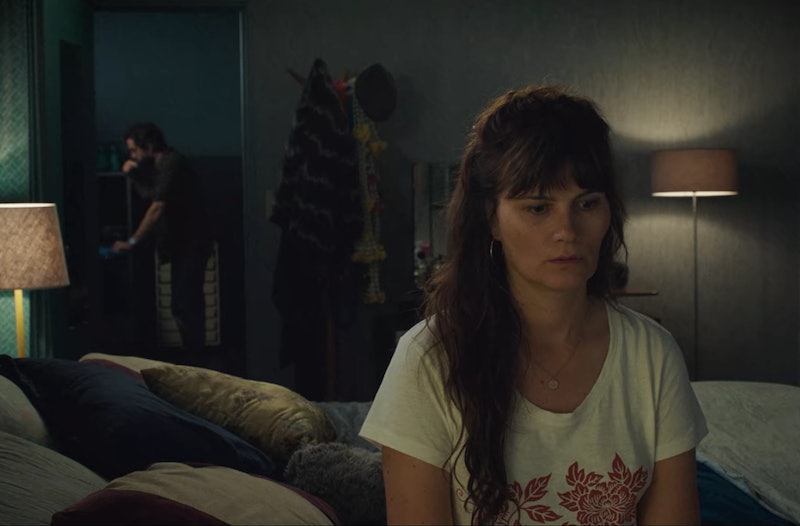 Netflix's new series Mythomaniac (or Mytho in French) depicts an exhausted French housewife named Elvira (Marina Hands) who decides to fake breast cancer for the attention. After premiering on the French-German network Arte earlier this fall, the series is now making its Netflix debut on Thursday, Nov. 28. And fortunately for those who marathon it over Thanksgiving weekend, it looks like Mythomaniac will return for Season 2, per the National Center for Film and Image (or CNC).

Where the series begins, Elvira's having a tough time with the cards she's been dealt. Not only is her husband, Patrick (Mathieu Demy), having an affair, but she's burnt out by the never-ending housework, which goes unnoticed by her family. These stressors lead to a breaking point when she goes to a radiologist appointment. Elvira tells her family she has a tumor, and all of a sudden, she has the attention she so desperately wanted. "The sicker I was, the better you treated me — it was as if something had come to save our family," she says in the series trailer.

At the same time, however, she doesn't know how to correct what she's set into effect, and her little white lie soon catches up with her. "I have a lot of empathy for Elvira; I am her lawyer. I never think of myself or my personal story when I play [her]," Hands told Ouest France in a translated interview. "I see a lot [of Elviras] around me. Women who have lots of children, who take care of the house...and make the lives of others as good as possible."

According to Variety, Mythomaniac was directed by Fabrice Gobert and written by author Anne Berest. In a translated interview with AlloCiné, the writer explained that lies originate within the family unit, which was a concept she wanted to explore with the series. "One begins to lie to one's parents as a teenager, and growing up one understands that our parents have lied to us," Berest said. "Becoming an adult is that, too! What is questioned through the series is where the lie is virtuous, and where it becomes a poison."

In the same article AlloCiné compared Mythomaniac to Desperate Housewives — the series takes place in French suburbia, which was meant to represent Elvira's feelings of being trapped, per Gobert. He continued, saying that they shot in Paris suburbs like Essonne, Yvelines, and Val-de-Marne, among others, to create the fictional setting. "There is something a little scary about living in a house that looks like all the others," the director told AlloCiné.

Fortunately for newfound Mythomaniac fans, the series will be continuing beyond the Season 1 finale. "The idea that it could end at the end of Episode 6 was in the air, and I said no," Gobert told the CNC in the same interview. "I wanted us to continue to see these people live, to watch them struggle with their problems. I found it exciting. It's really a long-term series, which has been imagined like that."

More like this
Everything We Know About When To Expect Money Heist: Korea Part 2
By Kadin Burnett
What’s New On Netflix: The Return Of 'The Umbrella Academy'
By Arya Roshanian
What’s New On Netflix: J.Lo’s Documentary & A Melissa McCarthy Series
By Arya Roshanian
12 Documentaries & Films About Cults From Netflix UK To Hook You From Start To Finish
By Kay Leong
Get Even More From Bustle — Sign Up For The Newsletter