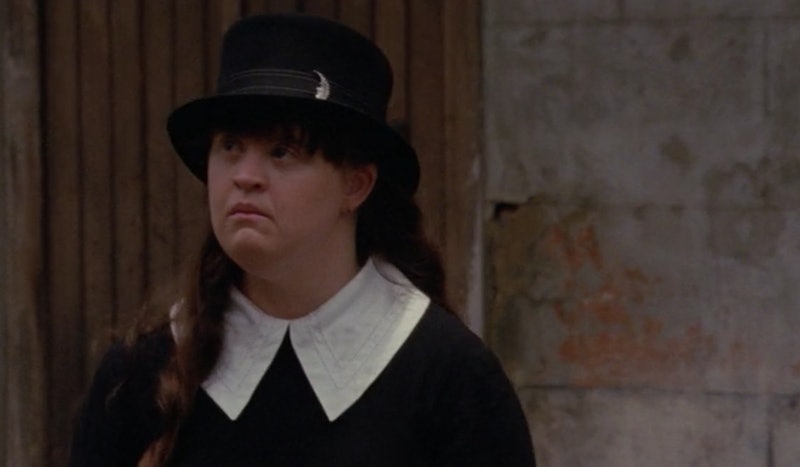 Within a matter of what seemed like just a few hours, Michael Langdon was able to resurrect most of the American Horror Story coven from the dead and put them right back where they belong. But one witch who has yet to return from the great beyond is Nan, one of the most powerful women the coven has ever had. So, where is she? Will Nan return on AHS: Apocalypse, or is she doomed to the afterlife for good?

Unfortunately for fans of Nan and her clairvoyance, there has been no announcement regarding her return to the show, per E! News. And based on the story arc so far, this does make sense. Michael only brought back Madison, Queenie, and Misty Day in order to prove that he had powers beyond what Cordelia, the reigning supreme, was able to accomplish. After all, Cordelia herself had tried in vain to rescue Queenie from the clutches of the Hotel Cortez. But now that Michael has passed the test of the Seven Wonders and positioned himself as the true Alpha, there's no reason for him to bring Nan back. He is the Antichrist — don't expect any do-gooding without an ulterior motive.

For those who don't really remember (it's been a while since Coven last aired) Nan was murdered by former supreme Fiona (Jessica Lange) and Marie Laveau (Angela Basset) as a sacrifice to Papa Legba. She was drowned in a bathtub, and the scene was pretty brutal to watch. Since then, there has been no hint from showrunner Ryan Murphy or anyone else involved with the show that Nan might make a comeback, even though the rest of the coven already has.

But the preview for Episode 7 shows that Papa Legba, the so-called Gatekeeper of the Spirit World, is set to make a return. And, as noted by Inverse, if Papa Legba is back, there's a good chance that Nan could return as well. After all, Nan was sacrificed to him and might still dwell with him in the spirit world. If Papa Legba is summoned, maybe Nan will be by his side.

But even if Nan doesn't make a return, the coven has some new, powerful witches to add to their ranks. It's been revealed that before Mallory, Coco, and Dinah convened together in Outpost 3, they were all powerful witches drawn to the coven. And they'll need all the help they can get to defeat Michael, whose powers are growing almost insurmountably strong just as Cordelia is getting weaker.

Luckily, the witches now seem to have one warlock on their side. After Behold Chablis spent time in Murder House learning about Michael's past with Madison, he seemed completely convinced of Michael's evil. He might not be as strong as Nan, but he'll be a massive help when the final battle between good and evil inevitably plays out. And this is American Horror Story, so you can be sure that showdown is coming soon.

Nan will be missed. But right now, the coven has bigger fish to fry.