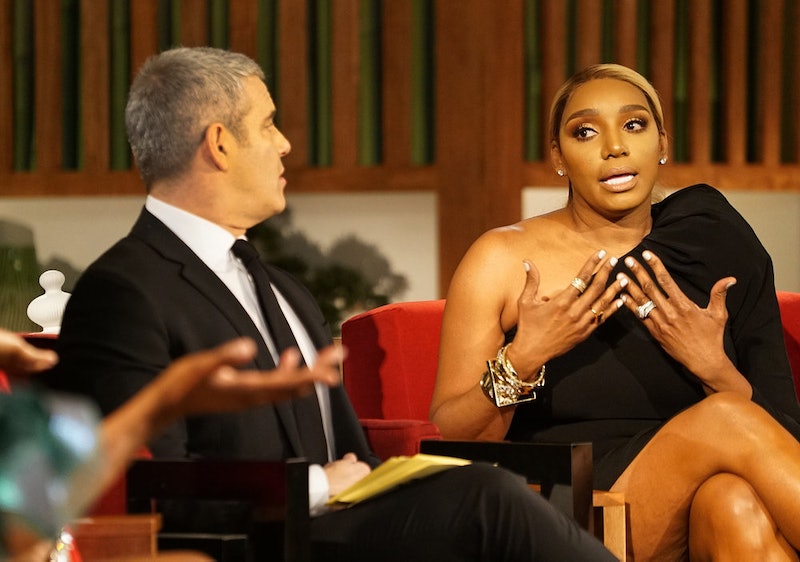 NeNe Leakes went from being the glue holding all of the Real Housewives of Atlanta cast together to unfollowing almost all of them on Instagram within weeks. After they filmed the Season 11 reunion, NeNe only follows Shamari DeVoe and Marlo Hampton on Instagram, proving that some onscreen beef between her and the other women has seeped into real life. All of this division might change what her future on the show looks like or if NeNe will return to RHOA at all next season.

As per usual, no casting decisions have been made or announced yet since this season is still airing new episodes. However, let's be honest —even if NeNe had zero friends on the show, there's no way she's backing out. NeNe has said many times that she thinks RHOA is her show. Back in 2015, NeNe declared, "I feel like the Housewives of Atlanta is my show. Just keepin' it real with you." She even said, "I think when you say Housewives of Atlanta, people say NeNe Leakes."

That is a very bold statement to make, but she is the only OG cast member left on the show. Plus, the second half of the season really has become The NeNe Leakes Show. NeNe has been involved in a lot of drama on the show and on social media with her costars.

NeNe has used the hashtag #HBIC in every one of her recent Instagram posts. It seems like she wants everyone to know that she believes she is the "head b*tch in charge." NeNe is not down and out. She is fired up and it would be shocking if she backed out, even with all of her current drama. And, there is a lot of drama.

During the Season 11 finale episode, NeNe freaked when Kenya Moore attended Cynthia Bailey's party. She theorized that Kandi Burruss and Cynthia intentionally blindsided her by keeping her in the dark about Kenya's return to the show. To make matters worse, it seemed like NeNe's suspicions were confirmed when Cynthia was caught telling her man Mike Hill, "I’m supposed to act like I didn’t know Kenya was coming." Maybe she should have waited until she returned to Lake Bailey before admitting that.

The situation looked even worse during the episode when the show played audio of a phone conversation between Cynthia and Kandi. During that conversation, Cynthia remarked, "I just want to make sure we was on the same page, setting up how Kenya got here." Kandi kept reminding her that the microphone was on, but the damage was already done. Now, NeNe (and plenty of viewers) feel like she was set up.

Not only that, but NeNe and Porsha got into a major social media feud on March 29. Porsha posted (and then deleted) screenshots from a profanity-laced text conversation with NeNe. Thankfully, the Instagram account iRealHousewives took screenshots of the screenshots. It was social media inception pretty much. Among other things, NeNe denied getting physical with Porsha when she kicked Porsha and Kandi out of her closet during the March 3 episode. She also referred to Porsha as the "big piggy with the busted shape." Yikes.

With all of this drama, it's very likely that all of the ladies involved will be asked back for Season 12, but will NeNe want to return? All signs point to yes. Why would NeNe back out now? Everybody loves a comeback. She has the perfect setup to come back stronger than ever. Or at the very least, with more drama to entertain the viewers.