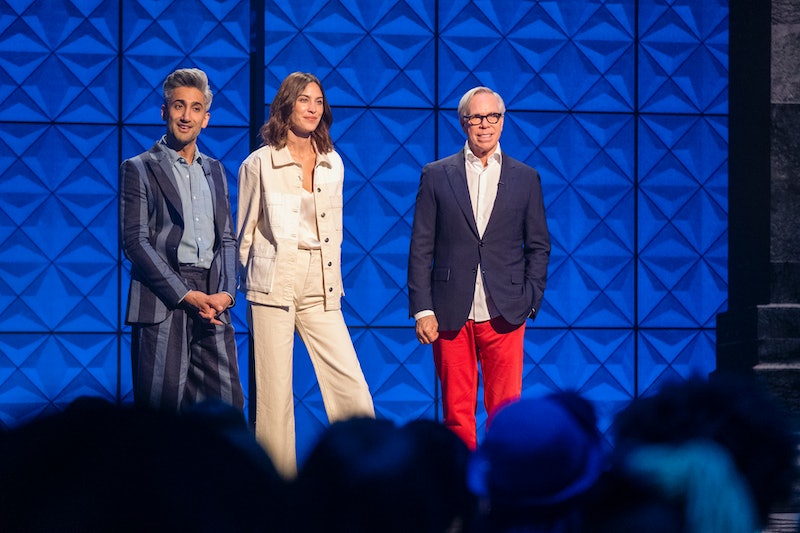 Considering that Project Runway has been on the air for an impressive 18 seasons, it's not hard to imagine that Netflix's new design competition series, Next in Fashion, could return for Season 2... and many more times after that. Hosted by Queer Eye's fashion expert Tan France and British model and designer Alexa Chung, the show follows the same winning format as its long-running predecessor. Contestants complete timed challenges with themes like denim or underwear that culminate in a runway show each episode, with a few famous faces popping up to help judge the looks along the way. In the end, one of the 18 competitors takes home $250,000 and the chance to sell their collection through Net-a-Porter. In other words, Next in Fashion could very easily continue as long as Project Runway has: just swap in a new cast of designers and repeat.

This early on, Netflix hasn't announced whether or not Next in Fashion will continue, but the fact that France loves the show so much should bode well for its future. Though the series does technically pit competitors against one another, he likens the tone to The Great British Bake Off, which he calls "truly the best show on the planet."

"I love that [Next in Fashion] has a vibe of that," France tells Bustle. "Yes, [the designers are] competing, but they're really loving with each other." In fact, France made sure to infuse a few "Queer Eye moments" into each episode — namely by getting to know the contestants' personal journeys on top of critiquing their work. "You watch Queer Eye thinking, 'Oh, maybe the world isn't going to sh*t," he says. "And that's how I feel about Next in Fashion."

Still, Next in Fashion was not without its challenges for France. He particularly struggled with the "heartbreaking task" of sending designers home, which he says was like telling one of the Fab Five's Heroes, "You need to leave Queer Eye right now. I've seen you enough this week, I'm done!"

But the difficulty of cutting designers loose was a testament to how much he loved them — and how much he believes the audience will grow to love them too. Plus, the competition aspect is all in the name of fashion, which France says is the real draw of the series. "[It's] some of the most incredible fashion that I personally have ever seen on a show," he adds.

Between France's filming for Queer Eye and Chung running her own fashion line, the hosts' schedules are pretty busy. But it sounds like so long as Netflix will have him, France is down for another chance to find what's Next in Fashion.