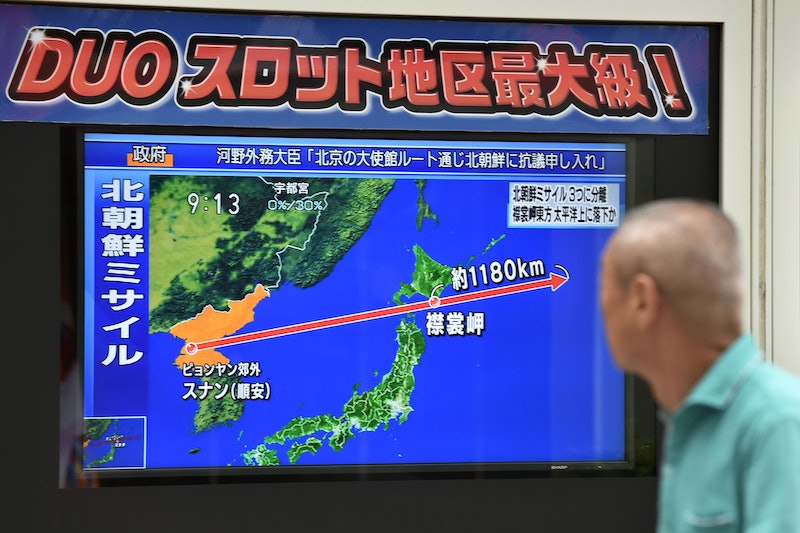 Following the news that North Korea launched a missile that flew over Japan on Tuesday morning (local time), the possibility that North Korea could try and attack Japan in the future has become more realistic. While the missile launch is hopefully a show of force and strategic endeavor by the North Koreans (and not indicative of an actual impending attack), you can obviously never predict the behavior of the North Korean regime with absolute certainty.

Either way, this latest missile launch should absolutely be taken seriously. Indeed, Japan's Prime Minister, Shinzo Abe, called the launch the "most serious and grave ever" that the country has faced. As CNN reported, the missile flew over Erimomisaki, which is located on Japan's northernmost island of Hokkaido, and then broke into several pieces and fell into the ocean. The pieces landed about 733 miles off of the Japanese coast.

During the launch, Japan's missile response system was activated, which sent citizens emergency alerts and instructed them to take shelter. However, as the Washington Post noted, Japan did not try to shoot down the missile, seemingly aware that it was on course to break apart in the Pacific Ocean.

While the missile did not make landfall in Japan, the fact North Korea shot a missile over the country (the first time it has done so since 1998) constitutes a significant threat. Japan's leader went on to assure the international community that his country was taking the issue seriously.

A missile launch across Japan is an outrageous act that poses an unprecedented, grave and serious threat, and significantly undermines the peace and security of the region.

Moreover, the Washington Post also reported that, following the launch, Abe spoke with U.S. President Donald Trump. They reportedly agreed that the launch was unprecedented and that increased pressure on North Korea (perhaps in the form of further sanctions) is needed. The United Nations Security Council has also agreed to have an emergency meeting on Tuesday to discuss the launch and its implications.

While the launch is being taken seriously in the international community (and should be), it is not necessarily indicative of an impending attack on Japan. As CNN reported, the launch was likely designed as a warning signal to the United States and Japan, which just yesterday finished conducting joint military drills (known as Northern Viper drills) in the region. The launch was probably designed to condemn the military exercises as well as to, as CNN reported, seek to drive a wedge between the United States and Japan.

Moreover, the United States and South Korea also began their joint military drills on Monday, which are scheduled to last about 10 days. These drills are typically seen as a provocation by North Korea and the launch of the missile that flew over Japan could have served as an unprecedented way of condemning these drills as well.

Overall, while North Korea's recent missile launch over Japan should absolutely be considered a grave threat, you should not jump to the conclusion that an attack on Japan is imminent. That being said, Kim Jong Un is not necessarily known for his predicability, so the international community must prepare for all scenarios.