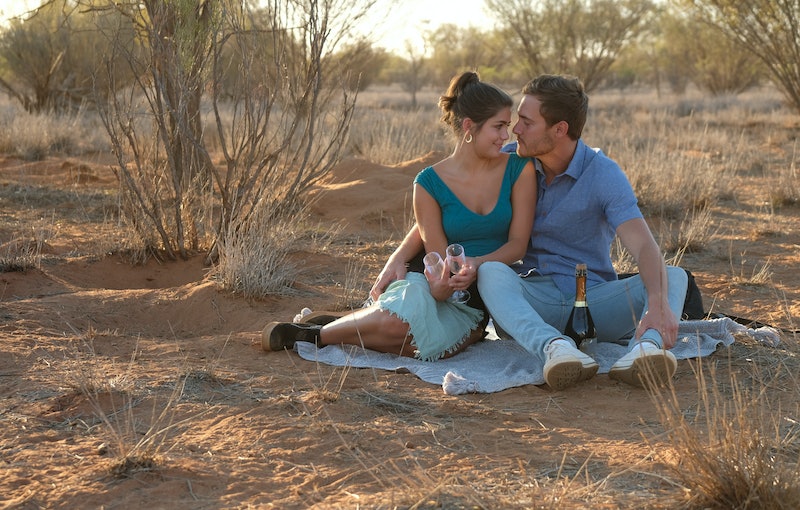 After Madison chose to go home during Part 1 of Peter's Bachelor finale, he was left with one woman: Hannah Ann. Still, it's unclear where his head is at. It's possible Peter and Hannah Ann will get engaged during Tuesday night's episode, but Chris Harrison also teased that we haven't seen the last of Madison, and a promo showed her admitting she feels like she made a mistake by leaving. So like, is Peter still going to propose? Will he go after Madison? What is even happening on this show?

Based on the promo that aired after Monday night's episode, it seems like — in a turn of events no one anticipated — Madison will come back to the show, as she's seen having a conversation with Chris Harrison about having regrets over her decision to self-eliminate. This lines up with the long-teased clip we've seen of Harrison telling Peter he "just found something out," which sends Peter into an immediate spiral. Could this news be that Madison has returned, leaving Peter even more uncertain about what to do?

It's obvious that he has stronger feelings for Madison than Hannah Ann, and it would kind of suck if Peter proposed to Hannah Ann just because she's the only one left. No one likes being second best, which Peter should know better than anyone.

However, we also know that Peter is easily swayed by other people's advice, so he is likely taking his family's...very strong opinion into consideration (namely, that they think Hannah Ann is a literal angel on Earth). Whatever goes down in Tuesday night's finale, hopefully Peter will make his decision and stick with it — for once.

More like this
Hannah Ann Got Engaged 3 Years After 'The Bachelor' & The Proposal Was Dreamy
By Grace Wehniainen
The Bachelor’s Christina Mandrell Comes From One Of Country Music’s Most Famous Families
By Brad Witter
This 'Bachelor' Contestant Had The Best Reaction To Wearing The Same Dress As Another Woman
By Grace Wehniainen
The Bachelor’s Greer Blitzer Apologized For “Uneducated, Ignorant” Past Tweets
By Brad Witter
Get Even More From Bustle — Sign Up For The Newsletter
From hair trends to relationship advice, our daily newsletter has everything you need to sound like a person who’s on TikTok, even if you aren’t.