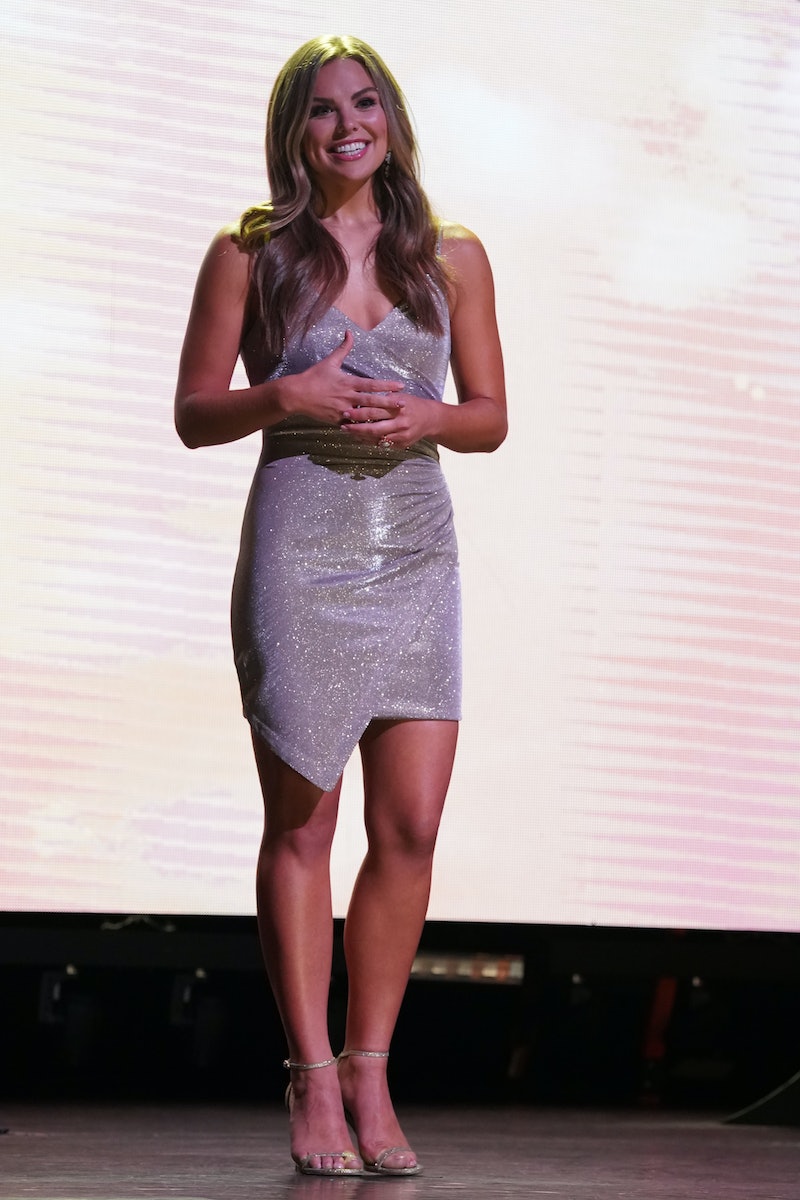 Former Bachelorette Hannah Brown had a very public messy breakup in 2019, but that hasn't put her off the idea of love forever. According to Cosmopolitan, Hannah recently admitted on her Instagram story that finding love, "the real kind," is still something she wants. However, for now, Hannah B. is not dating anyone in 2020.

Her single status is understandable, because she had a really busy year last year. Things for her love life were looking up at one point. She'd gotten engaged on The Bachelorette to Jed Wyatt and the two were planning to start a life together. But then reports broke that Jed had been seeing someone before coming on the show, and he hadn't been entirely honest about the situation. Hannah ended her engagement, and briefly started seeing her runner-up Tyler C. until he started pursuing model Gigi Hadid instead.

After that, Hannah joined Dancing with the Stars. Fans were instantly curious if she and her dance partner Alan Bersten were dating, but Hannah shot those rumors down. In an October appearance on The Ellen Show, Hannah said she and Bersten were just "great friends" who were only focused on trying to win. She added that she's experienced so much "trauma from dating," that she wasn't interested in exploring that with anyone at the moment. "I spent a whole year of my life trying to date and it still didn't work out," she said.

In an interview with Entertainment Tonight, Hannah said she understands why fans are so vocal about her dating life. "I think everybody has had this journey with me, and it's been focused on finding a person that I'm going to spend my life with, but right now, that's not what I'm focused on," she said.

So much for The Bachelor promos that keep making it look like Hannah joins Peter Weber's season for a second chance with him. Don't believe everything you see. "I feel like if we put two and two together, like, I worked my a** off to win [DWTS]," Hannah told Entertainment Tonight in another interview. "I was in the studio eight hours a day. You should do the math and watch in January."

Hannah also told On Air With Ryan Seacrest that she didn't have time even to see her friends — much less date. "All I do is dance," she said at the time. In the end, it was worth it, as Hannah and Alan won the show. Now Hannah will spend part of 2020 touring with the Dancing with the Stars live tour, and she's eager to get back into it. In another interview with Entertainment Tonight, Hannah said she took a week long break after DWTS ended, and she quickly missed her high-energy life. "I want to be booked and busy," she said.

She added to ET that she has a lot of plans for 2020, including potentially writing a book. Cosmo reported that Hannah also listed out her goals for 2020 on Instagram. She wrote, "Don't give up on dreams. Work hard. Feel good enough. Feel capable enough. Don't settle. Believe you deserve it all. Give back. Be kind. Be strong. Don't take bullsh*t. Be a leader. Learn from others. Gain wisdom. Get out of your comfort zone. Take chances. Stay hopeful."

As for love? Hannah's not putting her focus on it, but she's open to the idea. And she's continuing to work on herself in the meantime. "I'm great being a woman on my own. But I really think I've grown a lot for whenever that day comes for me [that I find love.]" she said.

During her Ryan Seacrest interview, Hannah made it clear what kind of guy she will be looking for when she prioritizes dating again. She said she wants someone who's there for the right reasons, not for Instagram influencer fame. "I really want somebody that is a professional that already has their crap together," she said. "And that would almost encourage me to get out, like not do the influencer thing — to really have a real career."

Perhaps 2020 will be the year that Hannah's life slows down enough to let her find that person. But, if not, that's OK too. She seems pretty happy with herself right now and is just working to accomplish her own big dreams. That's #goals right there.