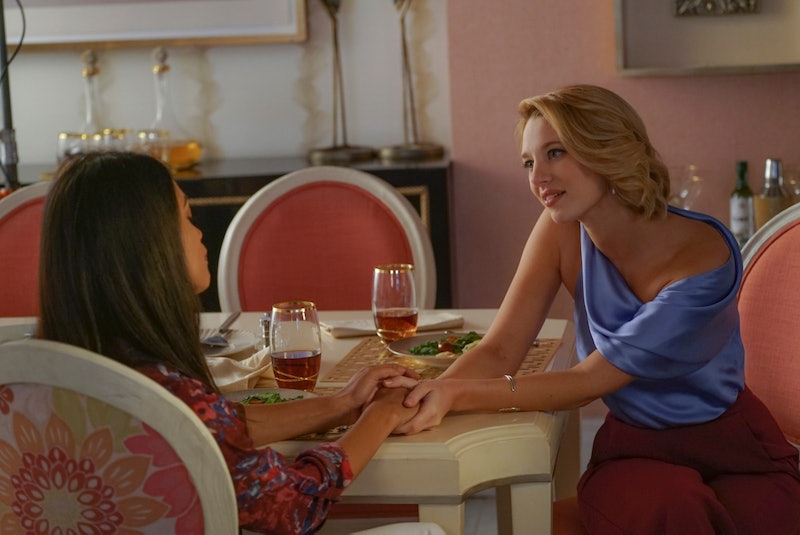 Light spoilers ahead for Jane the Virgin Season 5, Episode 7. Like any good rom-com or telenovela, Jane the Virgin is all about the "will they, won't they" tension between characters. These have included Xiomara and Rogelio, Alba and Jorge, Jane and Rafael, Jane and Michael, Petra (Yael Grobglas) and Rafael — the list goes on and on. But although Petra had been holding out for her ex-husband for quite some time, she finally moved on with Jane Ramos, a.k.a. JR (Rosario Dawson). And while they broke up in the Season 4 finale, it seems like things are getting serious between them again. And since we know that a wedding is in store this season, will JR and Petra get married on Jane the Virgin, or will it be another couple?

Petra's love life has never been what you'd call average. First, she dated the creepy Milos back in the Czech Republic, then escaped to the States and got engaged to Lachlan Moore. However, Rafael stole her away, and Petra married him instead. But as we know, she proceeded to cheat on the Solano with his best friend, Roman. After getting divorced from Rafael, Milos blackmailed Petra into marrying him in Season 2.

She then continued her streak of bad luck when she began seeing Chuck Chesser, who owned the hyper-masculine hotel next door. But they, too, eventually broke up. It wasn't until Petra began dating JR in Season 4 that she entered into her first loving (and lesbian) relationship.

And the two women seem perfect for each other. Not only are they both sensible, but they're confident go-getters who don't hesitate to claim what's theirs. But Petra's tumultuous life may prove to be too much for JR (which is why she broke up with her the first time, if you'll recall). And in last week's "Episode 87," the couple fought over Milos, whom JR believed Petra was having more contact with than she let on. And although Petra seemed to be telling the truth, her girlfriend is right to be skeptical, since she'd been lied to before (remember when she forgot to mention that she'd killed her sister, Anezka?).

However, in "Chapter 85," Petra apologized to JR, saying, "I will never lie to you again, ever. I love you. And I used to think my worst nightmare was turning into my mother — now I know it's living without you." Thankfully, JR felt the same way, saying, "I've missed you every day since we broke up." And thank goodness, because Petra hates wearing her heart on her sleeve like that. And now that they're back together, it could very well be the two of them who will get married.

After all, Jane is always the center of attention (the show is named after her, to be fair), but Petra is often pushed off to the side. And while she's done her fair share of bad things, she's also evolved a ton since we met her in Season 1, and it would be nice to see her get a happy ending — whether that means wedding bells or not.

As Jane the Virgin showrunner Jennie Snyder Urman told TVLine, "There's a wedding in the middle of our season this year, and we do our singing chorus of 'have sex and enjoy love' in a different way." That said, People released a photo of Gina Rodriguez filming Jane the Virgin while wearing a wedding dress. Also depicted in the photo were the actors who play Xiomara, Rogelio, and Luisa. So while it's more likely that Jane will be the one tying the knot a second time, this could also be one of the show's frequent dream sequences, which the outlet pointed out. Either that, or it could be a reenactment for one of Jane's books.

Whoever the wedding ends up being for, Urman continued in the same interview, saying that she hopes Jane the Virgin fans will feel that "the characters have grown and learned and changed and, if in similar situations, would act differently, because [in] five years, you change as a person." And who has changed more over the span of five seasons than Petra?

But whether or not JR and Petra are heading for the chapel, it's still nice to see them back together again. Plus, how good would Petra look in a pair of formal wedding shorts?

More like this
You’ll Most Definitely Recognise Kyle Pryor’s Soap Star Girlfriend
By Sophie McEvoy
'Cheers' Stars Pay Tribute To Kirstie Alley After Her Death To Cancer At 71
By Jake Viswanath
17 Photos Of The 'Wednesday' Cast Vs. The 1991 'Addams Family' Cast
By Grace Wehniainen
Everything To Know About 'Monarch' Season 2
By Gretchen Smail
Get Even More From Bustle — Sign Up For The Newsletter