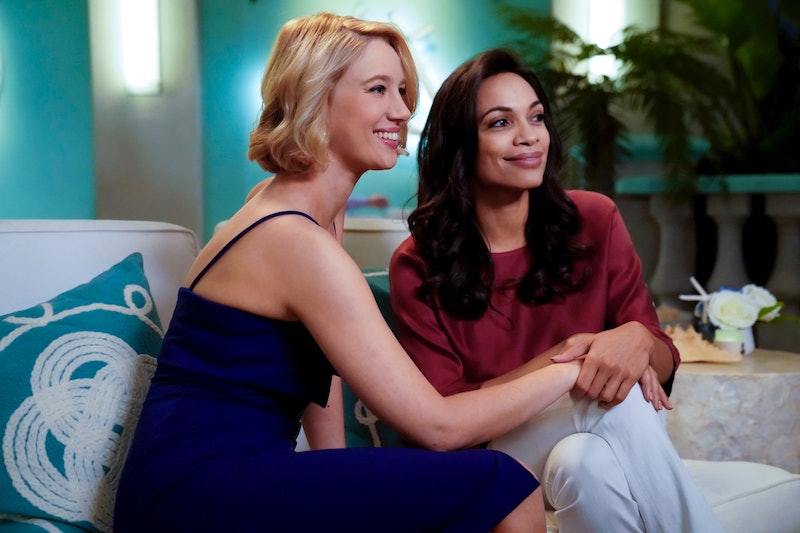 Spoilers for the April 6 episode. Jane Ramos, aka JR, is played by the always-fabulous Rosario Dawson on Jane The Virgin, but there's another reason why her presence in Season 4 has been so welcomed. Petra and JR are dating on Jane The Virgin as of "Chapter 79," and this relationship marks a major evolution for Yael Grobglas' character. As Jane (as in Jane Villanueva) notes, JR makes Petra giggly, but the benefits of Petra being in a relationship with her go far beyond Petra just being smitten. Because JR is revealing a whole new side to Petra that has made the Marbella owner more open to a serious, mutually supportive relationship — even if JR will need some time to warm up to the main Jane.

While there's still a lot of love between Petra and Rafael, their relationship was rarely portrayed as being healthy — instead, it was usually defined by the power plays they could pull on each other. Then, there was Chuck, who genuinely cared for Petra, but they started off on the wrong foot, and she had issues trusting him. Petra has also been shown with Lachlan (Rafael's nemesis), Roman (Rafael's best friend), and Miloš (her sort-of husband), but those weren't great relationships for pretty obvious reasons. With JR, Petra has no ulterior motive when it comes to pursuing her — it's strictly because Petra is overcome with emotions and that's a first for her.

Their new thing also marks Petra's first sexual relationship with a woman. Jane The Virgin creator and showrunner Jennie Snyder Urman told BuzzFeed News that they set the groundwork for Petra to realize her bisexuality when the series highlighted earlier in Season 4 that Jane's boyfriend Adam is bisexual. Though the Petra storyline was planned, Urman also wanted to include a male bisexual character, because female bisexual characters are usually hyper-sexualized through the male gaze. "We wanted to be able to tell that story [of Petra], but we also wanted to make sure we were balancing our representation and not just doing girls making out with girls," Urman said.

As per usual with Jane The Virgin, awareness of the issues at play means that the series is handling this storyline more authentically. Petra's first same-sex relationship is about the evolution of the character and not about how sexy it is for those watching. There's a lot of heat between Grobglas and Dawson, but it's more exciting for Jane The Virgin fans to see Petra really giddy about and vulnerable in a relationship. "There's something about her that's always conflated sex with where you're going to end up, and what you're gonna get, and different power dynamics," Urman told BuzzFeed. "With JR, we wanted Petra to be on her heel, and for Petra to suddenly realized [sic] that she wasn't quite in control."

Of course, because of the telenovela twists and turns in Jane The Virgin, there's the potential for Petra and JR's relationship to end in disaster. But this could also be endgame for Petra (kind of like how Rafael and Jane should be endgame). Gina Rodriguez hinted that Season 5 may be the last for Jane The Virgin. After all, Petra has met her match in JR. "She's really met someone as smart as her, and as layered as her, and as complicated as her," Urman said to BuzzFeed.

While it seems that JR may hold the power in the relationship, "Chapter 79" proves otherwise. Sure, Urman said the writers' intention in this relationship was to show Petra "unsure" in order for her to open up more. But it turns out that JR wants Petra to be straightforward with her — and when Petra is, JR has responded in kind. So while JR and Petra don't say that they love each other like Jane and Rafael do — and even like Jane and Petra do — they still take a big step in "Chapter 79" by admitting they are serious about each other. This is a milestone in Petra's love life, but it's also convenient for her to have a lawyer as a girlfriend — especially now that her mom is back in the picture.

More like this
'A League Of Their Own' Star Abbi Jacobson Is Engaged To Jodi Balfour
By Jake Viswanath
Olivia Rodrigo Reunited With Joshua Bassett On The Red Carpet & Twitter Can’t Handle It
By Jake Viswanath
Neil Patrick Harris & David Burtka’s Relationship Status Is Far From ‘Uncoupled’
By Jake Viswanath
On 'Industry,' Marisa Abela Takes Control
By Morgan Leigh Davies
Get Even More From Bustle — Sign Up For The Newsletter