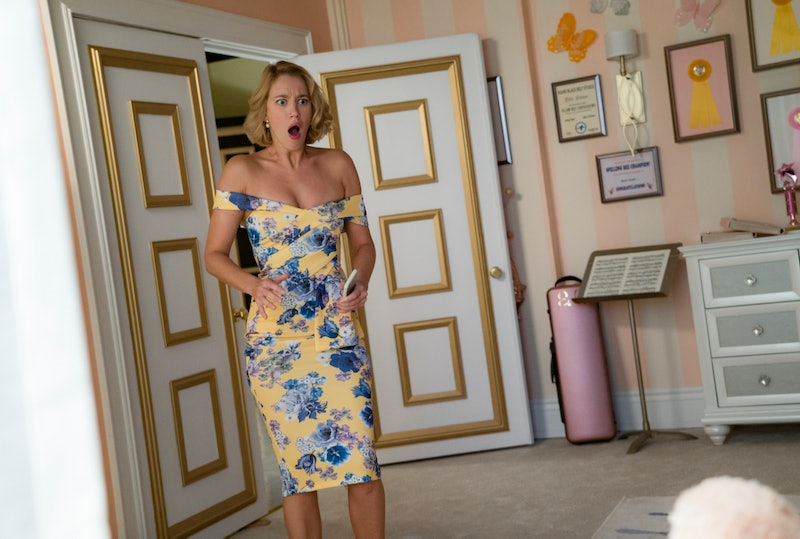 Ahead of the Season 5 premiere, most fans of Jane the Virgin are worrying about what Jane will do now that she knows Michael is still alive. But don't forget that Petra had a near-death experience when someone nearly shot her. While she has a lot of enemies, Petra's ex-husband Milos on Jane the Virgin is the most likely suspect of who assaulted her in the Season 4 finale. Thankfully, Petra survived when her ex-girlfriend JR saved the day and shot this attacker. But it's still a mystery ahead of the Season 5 premiere on March 27, so let's look at why Milos is the most likely suspect.

The Season 4 finale had some fun playing with the legendary TV question — "Who shot J.R.?" from Dallas — by twisting it around asking, "JR shot who?" The only clues fans got though about this person's identity was that Petra knew them. And while she seemed surprised to see the person, it didn't seem like she was totally surprised that they would be shooting at her. After all, Petra had come up with a long list of people who would want to see her sent to prison. But the person who is officially still alive, has blackmailed Petra in the past, and has used violence against her family is none other than her Czech ex-husband Milos.

Milos was last on Jane the Virgin back in Season 2. He had been Petra's boyfriend back when she was a street violinist known as Natalia in the Czech Republic. However, their relationship suffered just the tiniest bit when he threw acid at her, but hit her mother Magda in the face instead. When he came to the Marbella in Season 1, he revealed he had been aiming for Magda and that he still loves Petra. But still, she wasn't so interested in taking him back and this proves he's not above attacking people in Petra's family.

In Season 2, Milos blackmailed Petra into marrying him. He's part of the ever-changing hands that own the Marbella and had given Petra his shares in Season 1. "You know when I gave you hotel shares, there would be strings attached," he told her. And since he had information that could have landed her in jail alongside her mother (and because he was bugging her home), she agreed to marry him. However, she got a little more than she bargained for when it turned out Milos had upgraded from internet scammer in the Czech Republic to international arms dealer.

To rid herself of Milos, Petra ensured her mom's release from prison. Magda antagonized him away from the Marbella back to the Czech Republic where he was searching for an arms dealer in Prague to buy the grenades he was storing at the Miami hotel. Petra and Magda then sent intel from Milos' computer to the Czech authorities. He was arrested for his internet crimes and after Madga killed his henchperson Ivan, it seemed that Petra was rid of Milos for good.

In "Chapter 76," Petra's lawyer-turning-lover JR informed her that Milos was still in jail. "Well, it's always nice to cross an international arms dealer off the list of people who are after you," Petra replied. And JR confirmed again with the authorities in the Czech Republic in "Chapter 77" that he was still imprisoned after Petra became convinced that the blackmailer had hummed the song she used to play on the streets to JR's mom. But this blackmailer was particularly obsessed with bringing down Petra and considering the song, the fact that Milos always had an unhealthy infatuation with her, and that he's allegedly in jail 5,000 miles away (as in, they have no way of checking), Milos being Petra's attacker really does make the most sense. Plus, it would kind of mirror Jane's own storyline of husbands unexpectedly turning up.

No matter who it is, they likely won't hurt Petra again thanks to JR. But just because JR saved her life, doesn't mean that JR will forgive Petra for lying to her about Anezka. And while that's not a gunshot, that will still cause Petra a whole lot of pain.

More like this
'Line Of Duty' Fans Might Recognise These 'Bloodlands' S2 Filming Locations
By Sophie McEvoy
'The Lord of the Rings: The Rings of Power' Revisits Iconic Spots From 'The Hobbit'
By Darshita Goyal
'RHOSLC’s Newest Cast Member Has Tried To Become A Housewife Before
By Jake Viswanath
Glenda Cleveland Died 2 Decades After Trying To Turn In Neighbor Jeffery Dahmer
By Brad Witter
Get Even More From Bustle — Sign Up For The Newsletter