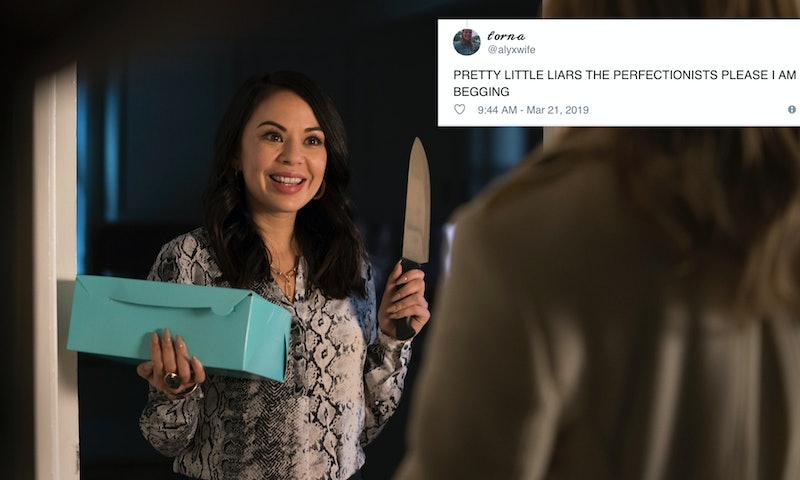 Pretty Little Liars was the ultimate show for anyone who had the privilege of being a teenager during the 2010s. You'd tune in each week to new dramas and text messages from A, and if it felt like some of the most fun you've had while watching TV this decade, then you wouldn't be alone. That's why so many people were thrilled to hear of its return in the form of Pretty Little Liars: The Perfectionists. Set a few years after the original show, this reboot will focus on three new college students. But will Pretty Little Liars: The Perfectionists be on Netflix UK?

According to Capital.FM, on this new spin off you'll be "meeting four new characters who are Perfectionists — and one of them won't make it to the end of the pilot." There will still be some familiar faces, including Alison and Mona, but the show will mostly hone itself in on the dramas of the new characters.

While its first episode debuted on Wednesday, March 20, there's still no sign of it on Netflix UK. There might be some hope of an appearance there in the near future, purely down to the fact that the streaming service has the original series in its catalogue, but as What's On Netflix writes: "If you’re looking for The Perfectionists on Netflix, you may be out of luck this year." A representative from Netflix told Bustle that they were "unable to share any information [about the series] at the moment."

The show's currently airing on U.S. platform Freeform, which is unfortunately unavailable to PLL fans in the UK. And in more disappointing news, a UK broadcaster has yet to snap up the rights for the show, according to Geek Town. So, if one of you could hurry up and do that, I think that'd be really great, thanks.

Since Netflix is the main distributor of PLL here in the UK, it seems like your best bet will be to keep your eye out there. The streaming platform made the original series available a little while after its finale was aired on TV back in June 2017, and I'm hoping the same thing will happen this time around.

Hopefully Netflix will pick up the show sooner rather than later, especially since their Twitter account is being inundated with understandably thirsty PLL fans who are begging them to broadcast the show. While hoards of Twitter users seem to be sending Netflix UK several desperate cries an hour, as far as I can see, the company has yet to respond.

With all the demand they're currently getting, I'd be surprised if Netflix UK didn't add The Perfectionists to its catalogue soon. In the meantime, you do have seven seasons of the original series which you can rewatch to your heart's content on the platform. Maybe by the time you've seen it again for the hundredth time, The Perfectionists will have been added to your Netflix UK library. I'm hoping that it'll come around sooner than you think.