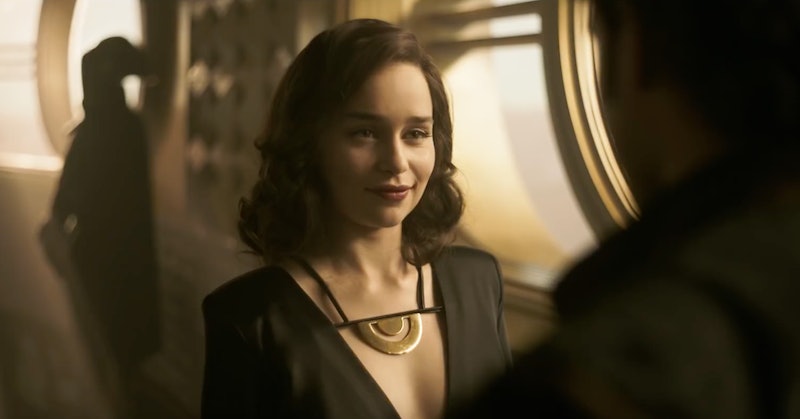 Spoilers ahead for Solo: A Star Wars Story. In Solo, the biggest plot twist of the movie happens, unsurprisingly, at the very end. It turns out that Qi'ra (Emilia Clarke) has been working for Darth Maul's crime ring, which audiences hadn't really thought possible considering that the villain died in Episode I: Phantom Menace. With such a shocking ending, it seems almost certain that Qi'ra will be in more Star Wars movies. The fact that Clarke has a contract for additional films only makes predictions of a future movie starring Qi'ra and Darth Maul even more likely to come true.

In an interview with The Hollywood Reporter, Clarke revealed that she'd signed up for multiple Star Wars movies. According to the actor, though, that doesn't necessarily promise her role in them. "I think it's like an insurance thing," Clarke said. It would make sense that the star would need to sign on for more movies in the future even if the films aren't necessarily planned, as that's pretty normal for franchises. Then again, the ending of Solo does make it seem clear that future Star Wars movie will most certainly continue the story of Qi'ra and Darth Maul's future with the Crimson Dawn.

Although Han Solo breaks free from the crime group's mob-like membership, Qi'ra chooses to continue to live life as a delinquent, proving her allegiance to Darth Maul outweighs her friendship with Solo. The ending of Solo might lead people to conclude that the next Star Wars movie will be about Darth Maul, which makes sense since we all have questions about how exactly the former Sith Lord survived being severed in half by Obi-Wan's lightsaber. As such, the next Star Wars standalone movie could very well hav a focus on Qi'ra, especially if the theory that she's Rey's (Daisy Ridley) mom is actually true.

The debates over Rey's parentage have been going on since the mysterious scrapper first appeared in The Force Awakens. Basically, every female character from Star Wars history has come up as a potential mother-figure, from General Leia (Carrie Fisher) to Jyn Erso (Felicity Jones). The evidence that Qi'ra is actually Rey's mother, though, is pretty strong, since the two characters seem to have many similar qualities including their grittiness and independence — not to mention expert fighting skills.

A clue from the Star Wars blog, Bounding into Comics, might provide the most compelling evidence that Qi'ra is Rey's mother, and that's because the The Last Jedi’s Art Book reveals that Rey's name was originally written as Kira. Seeing as Qi'ra is pronounced as "Kira," Rey being named Kira would have been much more obvious that the young hero is in fact related to Han Solo's former fling.

While Solo has always been described as an origin story for Han Solo, its ending suggests that it's actually much more than that. The movie could end up bridging a gap between Rey and the original Star Wars series by explaining through Qi'ra how Rey is related to the overall world.

And even if Qi'ra isn't actually Rey's mom, Clarke's character still has an exciting story ahead of her, which the future films could explore. As io9 reports, Darth Maul's story continues in the TV show, Star Wars Rebels, in which the former Sith ends up leaving the Crimson Dawn. If future Star Wars films end up following more of Darth Maul's story (whether to show a re-match between Obi-Wan and Maul or otherwise), it will most likely include Qi'ra. At least, it definitely should, since the headstrong combatant played by Clarke seems to only have just begun her role in the Star Wars universe.