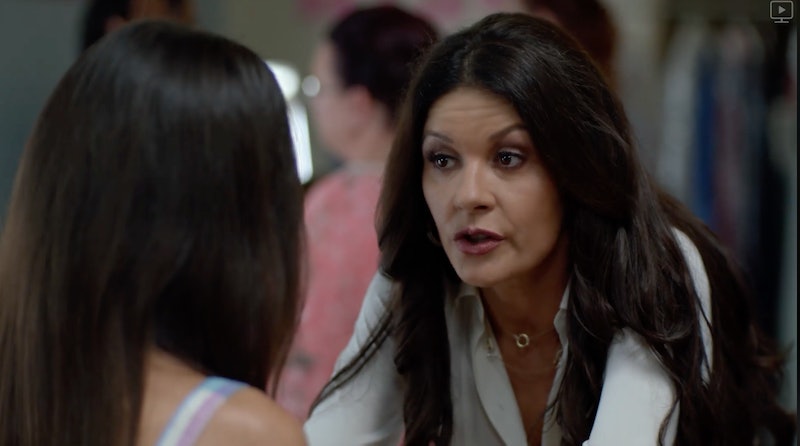 Pageants are supposed to be fun, but Queen America, whose season finale airs Sunday, Jan. 6., shows a darker side to the whole thing. Season 1 of this Facebook Watch show has followed Vicki Ellis (Catherine Zeta-Jones) as she coached pageant girls in the Tulsa, Oklahoma area. But after her protégé and Miss Tulsa, Hayley (Victoria Justice), doesn't make the cut, Vicki turns her sights to Samantha Cole (Belle Shouse), helping mold her for her shot at the crown. Drama obviously ensues. But despite its interesting premise, it's unclear whether Queen America will return for Season 2.

While there have been other Facebook Watch shows — Sorry for Your Loss, SKAM Austin, and Jada Pinkett Smith's Red Table Talk, most notably — it's still a fairly new concept for viewers. "I'm very up on devices and social media and all that...but still, this is completely new," Zeta-Jones told TV Insider of the show's device-friendly format. "Do I miss the old school? Yes, I do, because it's familiar. But I have to let it go. Once Queen America started airing and I could see people's conversations about it, their likes and dislikes, I got it."

The Facebook Watch series has been an interesting look at the washed-up has-beens who run the fictional Miss America Stars and Stripes US pageant. And while the series doesn't shy away from the ruthless aspect of the industry, there are positives, too. "I grew up in Tulsa…I knew so many girls that [pageants] did incredible things for," the Queen America creator Meaghan Oppenheimer told Variety. "Girls that were able to pay their way through college, girls that were in foster care that pageants were a way to the future for them. There are a lot of negative things about the [pageant] world, and I didn’t want to let anyone off the hook for that, but there are a lot of girls that I’ve spoken to, that I’ve interviewed, that are so grateful to pageants."

And while Vicki herself is a prickly character, Zeta-Jones still has a great deal of affection for her. "I want everyone to love to hate her and hate to love her," she said in the same TV Insider interview. "You may not like this woman, but once the onion layers are peeled away, you'll understand her."

For that reason, the actor hopes Queen America is able to continue exploring her nuanced character with more seasons. "[Vicki] still lives in a world before political correctness and before all these great things that have happened for women, and she can feel that world slipping away," she continued. "That's why I'd love to do a second season, because there are so many directions we could go next with a woman who, at the age of 49, is saying, 'OK, what do I do now?'"

However, there's been no official word on whether Queen America will be get the opportunity to strut its stuff for a second time. The Facebook Watch series was first announced in March 2018, per Variety, with the help of production companies wiip and Made Up Stories. The show premiered on Nov. 18, 2018 to middling reviews. That said, never say never. "I think it’s very likely, fingers crossed," Oppenheimer said in an interview with Decider. "I don’t think we’ll know until end of show."

So although it's probably too soon to tell whether the pageant queens are coming back, the good news is that all 10 episodes will still be available on Facebook Watch for fans to marathon as many times as they choose.