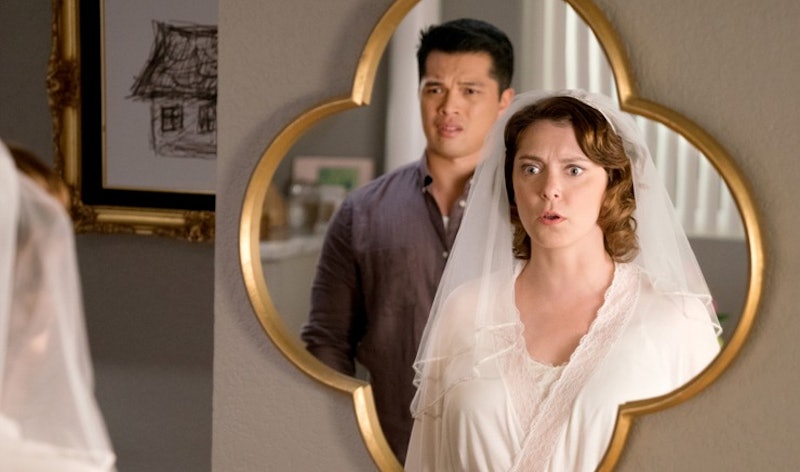 So, are you still reeling from the final moments of Crazy Ex-Girlfriend's Season 2 closer? Yeah, me too. There were some major revelations but one of this biggest shockers was the Josh left Rebecca at the altar for someone else: God. Rebecca vowed revenge on Josh for the way he had hurt her, which is most likely where the story will pick up in Season 3. But how did we get here?

To say that Rebecca was compartmentalizing her problems, both psychological and emotional, for years and years would probably be an understatement. All of that compartmentalizing broke down and Rebecca's behavior began to worry Josh. After going off the rails during the wedding planning and showing a more manic side to herself, Josh was had doubts about the wedding. This wasn't the woman he had proposed to and her mania was bringing out a side of Rebecca he hadn't totally seen before. He was freaked out. We were freaked out.

But things got exponentially worse because duh, this is Crazy Ex-Girlfriend we're talking about. As the time to say "I Do" got nearer and nearer, with Rebecca trying to fly as straight a course to the altar as possible without it all going up in flames, Josh began having doubts. Big doubts. The kind of doubts that are normal to have two or three months into a relationship, not right before you get married.

When the big day arrived, Josh had the opportunity to look at the packet of info Trent, Rebecca's crazy ex-boyfriend who was a truly unnecessary plot twist, showed up on his doorstep to deliver and ruin the wedding. While Rebecca was frantic about Josh being a no-show, he was busy driving right past the wedding venue and straight to the seminary. He threw out the packet of information, quite literally dumping Rebecca, and answered God's call.

When Father Brah informed Rebecca that Josh went to seminary, she freaked out, too. After nearly throwing herself off a cliff — a literal cliffhanger — Paula talked her off the ledge and Rebecca asked her to help get revenge on Josh. As the camera panned out on the wedding party, the fate of Josh and Rebecca was still up in the air — a narrative cliffhanger — and something tells me when we fade in on Season 3, things will get very messy indeed.