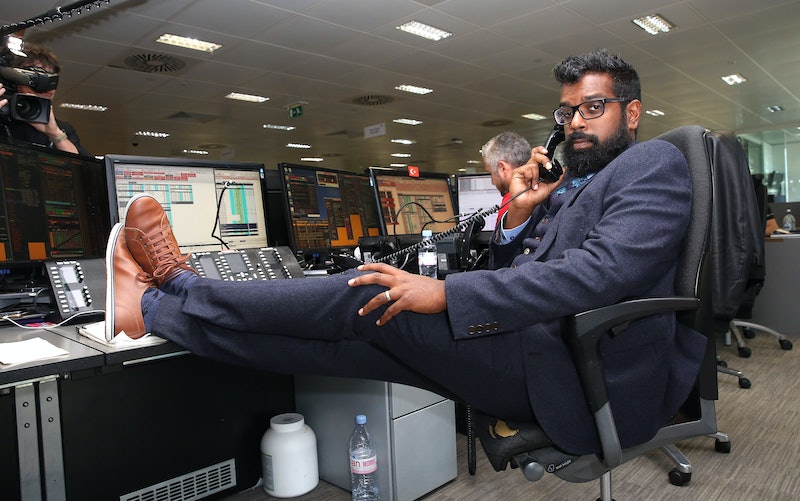 For a while, Romesh Ranganathan's was the comedian's comedian, flying somewhat under the radar. But, in recent years, this funny man has finally come into his own. No stranger to a TV comedy quiz show, Ranganathan always kills it when sitting aside his fellow comedians. However, while he's hilarious when paired with others, Ranganathan truly shines when on his own, which is why I implore you to see one of his stand up shows. Although, that does require him coming to town. So, will Romesh Ranganathan tour the UK in 2020? If you're looking for genius live comedy, look no further.

As the Ticketmaster blog announced on Sept. 25, 2018, Ranganathan's tour The Cynic's Mixtape — a nod to the comic's trademark acerbic style — is coming to venues across the country in 2019, and stretching into 2020. According to the blog:

"Romesh will be delivering a selection of all the stuff he’s found unacceptable since his last tour — including why trying to save the environment is a scam and the suspicion that his wife is using gluten intolerance to avoid sleeping with him."

Sounds intriguing, right? The tour's set to kick off at the end of the summer in Southend, as debut night takes place at Cliffs Pavilion on Sept. 13, 2019.

Staying south for the second night, he'll be performing at The Brighton Dome, before heading north to Nottingham's Royal Concert Hall. And don't worry, he's got most of the country covered, as he'll be playing thirty dates from September 2019 until his final two stops at London's Eventim Apollo on April 17 and 18, 2020. Make sure to check Ranganathan's website for his full tour dates, and, as he states in his Instagram bio, "Don’t buy tickets from online touts. Twickets link below — romeshranganathan.twickets.live."

Ranganathan's had a roll of good times recently, especially since the release of his book Straight Outta Crawley: Memoirs of a Distinctly Average Human Being, which came out in October 2018. The book details the comedian's life so far, and how he finally went on to become one of the UK's most beloved comedians. He's also bound to get even more love now that his show Judge Romesh has been brought back for a second season, as it landed on Dave back on May 29 2019.

As iNews reported ahead of its premiere, the second season took only three days to film, which might have been helped by Ranganathan's ultra quick wit and ability to improvise. The paper called the it "the show for a post-Jeremy Kyle world." If that doesn't pique your interest, I don't know what will.

With all that said, you may want to scoop up a ticket for this tour any way you can. Now that the comedian's popularity is surely soaring at an lightening-speed rate, this might be the last time you'll get to see him in a venue that isn't a huge stadium. If you thought 2018 was Ranganathan's year, then think again. This man has huge things on the horizon.