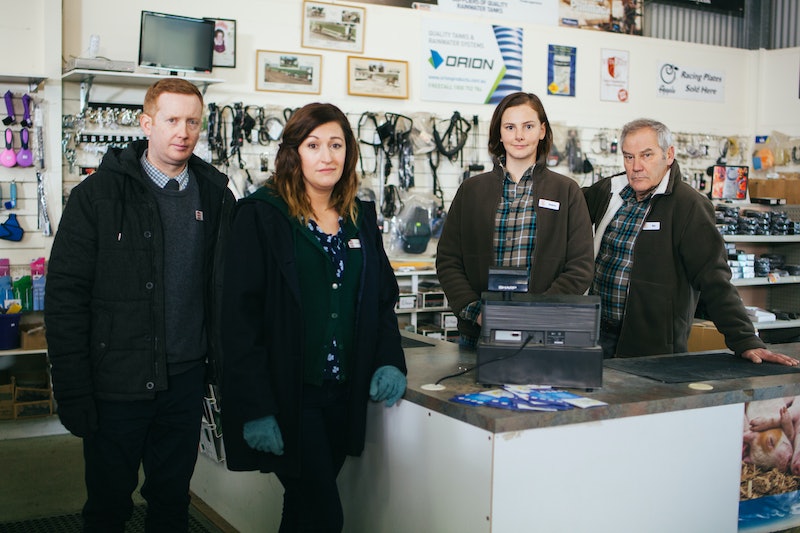 Set in the Australian province of Tasmania, Rosehaven follows best friends Emma Dawes (Celia Pacquola) and Daniel McCallum (Luke McGregor). The gem of a comedy concludes its third season this weekend on SundanceTV. And while unfortunately, it's too soon to tell if Rosehaven will return for Season 4, there's plenty of reason to put stock in the show.

McGregor and Pacquola are both well-known comedians in Australia, where they starred in the futuristic comedy series Utopia. McGregor has also appeared in two episodes of the beloved Australian comedy Please Like Me, starring Josh Thomas. Pacquola got her start in comedy in 2006, when her then-boyfriend entered her into the Raw Comedy awards, per the Sydney Morning Herald. She made it to the final round, losing out to none other than Hannah Gadsby of Nanette fame. "I went, 'I'll keep doing this until it stops' — and it hasn't stopped," Pacquola told the Sydney paper. "It could still happen any day, any day now!"

From there, Pacquola and McGregor met when they were both starring in Utopia, where their comedic chemistry became undeniable. As a result, they decided to create a TV show together. "One of my favourite [sic] things about Ceals is that I can ask her pretty much anything and she'll run with it," McGregor told the Sydney Morning Herald. "Writing Rosehaven together is so much fun because we can have these discussions through the characters. I hope we continue to hang out long after Rosehaven is finished."

As for what fans can expect should Rosehaven get renewed, Pacquola told the Australian magazine Who of Season 3 that, "It's more of the same — but it feels a bit better. It feels like every time we do [the show], it gets a bit more confident. But even less happens!" Season 4 would likely follow a similar trajectory.

McGregor echoed his co-star's sentiments, saying their characters are well-established now. "The hardest thing about writing Season 1 was we'd put these two characters together, and we didn't really know what they would say to one another," he told the outlet. "Now we know what they'll say, and it's so much fun to write."

The pair also said that since Rosehaven became a joint production between Sundance and the Australian Broadcasting Corporation in 2017, they had to be more conscious of how jokes were going to land for international audiences. But it's not a bad problem to have. "The only real change is getting the occasional tweet from someone in San Francisco saying, 'Hey, I love your show!' That just blows our mind," Pacquola told Who.

Of course, McGregor and Pacquola are aware that nothing is a guaranteed in show business, and have already begun saying their goodbyes to Rosehaven just in case. "It's potentially the last ever ep of #Rosehaven tonight. Hopefully not, but if so - I'm grateful it was still on air when I went to my school reunion," McGregor tweeted in March, ahead of the Season 3 finale in Australia. "Thank you @ABC, thank you everyone who helped us make it, and thank you @CeliaPacquola who is still better than me at Mario Kart."

Hopefully, that goodbye was preemptive.