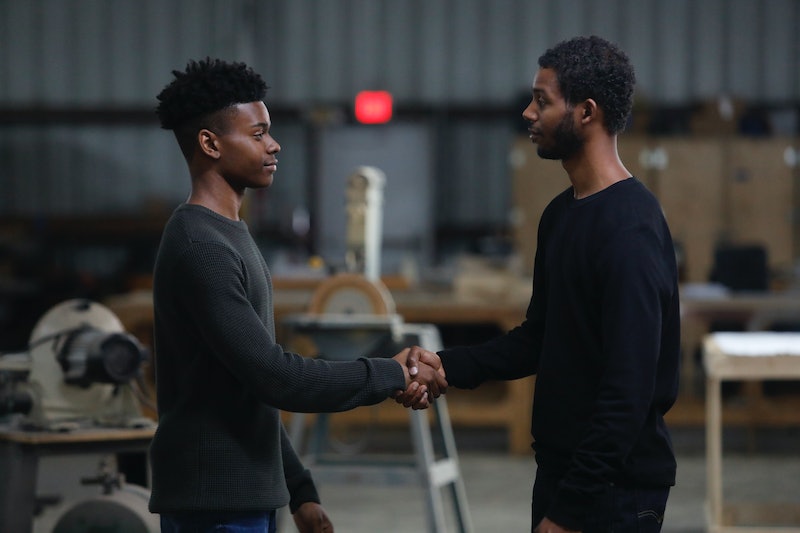 Major spoilers ahead for the “Funhouse Mirrors” episode of Cloak & Dagger. Tyrone (Aubrey Joseph) and Tandy’s (Olivia Holt) undercover investigations lead to shocking conclusions in the July 5 episode of the series. Tandy cons her way into an internship to get close to Mina Hess (Ally Maki), the daughter of her father’s research partner, while Tyrone follows up on the revelation about Billy’s (Marqus Clae) friend Duane (Dalon J. Holland) working with Detective Connors (J.D. Evermore) to continue his drug operation despite knowing he killed Billy years ago. The detective’s involvement in another tragic police shooting witnessed by Tyrone left fans wondering what he'll do next. Will Tyrone kill Connors or figure out a legal way to make him pay for his crimes? Tyrone is a good kid, but he’s starting to dive headfirst into his dark powers.

In Episode 6, Tyrone visits Duane to inquire about a job at his house construction company. Duane says he has no current openings and tells Tyrone that he is college material and bound for greater things. Tyrone knows Duane is also running an illegal operation, so he decides to follow one of Duane’s drug runners (played by Tanner Ellis) to gain more information about the business.

It quickly backfires when the drug runner outsmarts Tyrone and slams him against a wall. He shoves a gun into Tyrone’s neck and warns him to stay away. Tyrone temporarily abandons the mission and retreats back to Tandy for more conning advice. She tells him to create his own opening with Duane’s business, even if that means becoming a drug runner to discover more information about Connors. She also recommends using people’s nightmares and fears against them to achieve his goals. In true Tyrone fashion, he laughs it off, but Tandy’s words stick in his mind.

Tyrone heads back out to find the drug runner from earlier in the episode while Tandy suits up for a swamping excursion with Mina Hess. Meanwhile, Detective Connors is unhappy about newcomer Detective O’Reilly’s (Emma Lahana) interest in putting together pieces of a drug operation puzzle. The drug carriers that O’Reilly is chasing are connected to Duane’s business that Connors is helping to insulate. It’s the tradeoff for Duane’s knowledge about Billy’s murder and Connors does not want O’Reilly poking into his business.

The detectives make an impromptu stop to bust some of Duane’s workers, including the same guy that Tyrone is watching from afar. As they take off running, a backpack of drugs is thrown away and Tyrone quickly retrieves it before O’Reilly can get out of the police car. Connors briefly detains the drug runner and physically assaults him in front of O’Reilly, who says the bag is gone.

The drug runner catches up with Tyrone, who is on his way back to Duane’s construction business. Tyrone taps into his fears and temporarily holds him in the dark dimension with a dark figure. When Tyrone lets go, the terrified man runs away and leaves the bag with Tyrone. Tandy’s advice to use darkness to his advantage worked in his favor and showed a scary side of Tyrone’s powers.

Tyrone uses the bag to convince Duane to let him become a drug runner. Duane reluctantly agrees and takes him on a drive to finish up a drug exchange. The pair share an insightful conversation where Duane says he is a survivor simply trying to rise up and make it in the tough and often unjust city of New Orleans. He also offers an interesting reply to Tyrone’s statement about believing in justice. “Justice is for White people in some other place,” said Duane. “Not us here.”

Tyrone later confronts Duane about his knowledge of Billy’s murder when they return to the construction business. He accuses Duane of metaphorically building a business on Billy’s dead body and says he could help to hold Connors accountable for the murder. Their argument is interrupted when Connors knocks on the door, forcing Tyrone to hide and listen to the conversation. Connors hands Duane a gun and tells him to shoot O’Reilly when she comes through the door.

The detective says Duane’s business has become too sloppy and O’Reilly is close to discovering their agreement. Duane admits that he has never killed a person, but Connors says he will use his connections to protect Duane. O’Reilly comes in and Duane holds up his gun to shoot her, but she kills him first.

Connors likely knew O’Reilly would get the drop on Duane and wanted him dead to tie up a few loose ends. Duane’s death meant the only person whom Connors thinks knows his secret about Billy is eliminated and it would prevent Connors from being tied to the drug operation. But, even if O’Reilly had died, Connors might have shot Duane to cover up his dirty deeds.

Tyrone instinctively screams “NO!” when Duane is killed and catches Connors' attention, leading to a chase in the streets. Of course, Connors tries to shoot Tyrone so he won’t be a witness. But, Tyrone’s fear kicks in and he teleports back to Tandy’s church. She’s completely deflated after Mina deduces her real identity and Ivan Hess (who is alive but has suffered severe mental damage) cannot offer her any answers, but she offers comfort to a visibly distraught Tyrone.

Duane’s shooting is a major turning point for Tyrone. He seems to have more control of his powers as he evades Connors’ gunshots, which will finally put him on par with Tandy in terms of using their abilities to effect change. But, it was also emotionally taxing to witness yet another shooting of a loved one at the hands of police.

Tyrone was speechless and sobbing at the end of the episode, but those tears might turn to an even deeper rage and frustration toward Connors. A previous episode suggests a better (and legal) way to exact revenge against Connors, but Tyrone’s diplomatic approach may fly out of the window after Duane’s death. Fear has always been Tyrone’s motivator toward doing the right thing, but Cloak & Dagger is taking him down an increasingly darker path toward a moral grey area.

In the comics, Cloak could use his powers to entrap an enemy in the dark realm, torture them with horrific visions, and hold them hostage until they eventually die. TV Tyrone seems to be more amicable and human, but it would be interesting (and disturbing) to see Connors tortured and trapped in a dark nightmare. Season 1 is winding down to its final episodes, so Tyrone’s dilemma over whether he should kill Connors is bound to see a resolution soon.