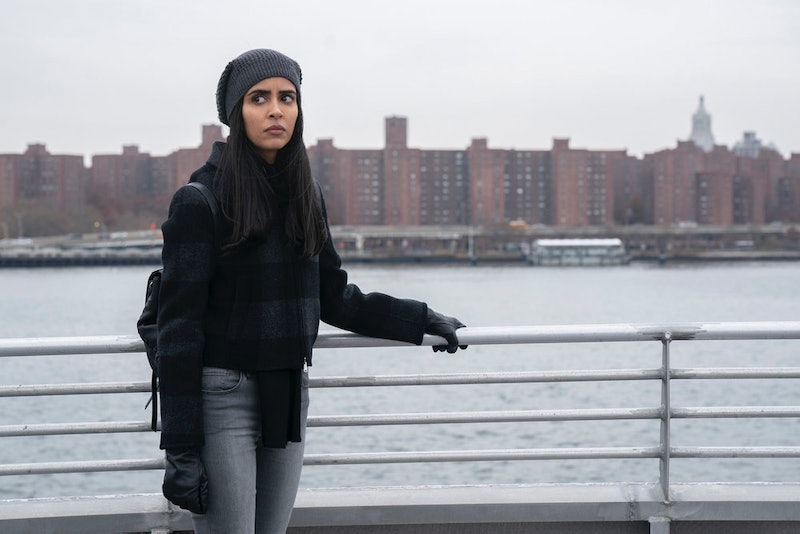 Spoilers ahead for the Manifest Season 2 finale. Manifest hasn't been renewed yet for Season 3, but if it does return, star Parveen Kaur tells Bustle that she's "concerned" about her character Saanvi possibly dying. The finale showed her character accidentally killing the Major (and, yes, Kaur thinks the Major is really dead). Kaur thinks that this accidental murder has put Saanvi in a really vulnerable place. Add in that she is no longer experiencing the Callings (which appear to have been what saved Zeke) and Saanvi is in for a rough next season.

"I am definitely concerned that I might not have a job," Kaur says with a laugh when asked if she's fearful that Saanvi might die. "I would be concerned for Saanvi, and I do think about that. 'Where is her story going?'" Kaur has some ideas for what may be next for Saanvi, although they're her own speculation, as creator Jeff Rake may have different plans.

"She's in such a vulnerable situation," Kaur says of Saanvi's headspace after accidentally poisoning the Major in a botched attempt to extort information. "I would love to see her navigate through that and rebuild that herself throughout that situation."

Saanvi was isolated for much of Season 2 as she worked in her lab to get rid of the DNA anomaly that was causing the passengers' Callings. She managed to get rid of her own Callings, and she had believed that was the way to beat the Death Date. But she seems to have been wrong. Zeke followed the Callings to a tee, and he ended up surviving his Death Date. Now that Saanvi is left out of the group Callings and she just killed someone, she's going to be even more isolated than before. Kaur says that she wants Saanvi to reach out to someone for help, like Vance or Ben, but that she doesn't think Saanvi will, because she is inherently "kind of a loner." Kaur suggested that perhaps Saanvi's ex Alex can return in Season 3 to help her through it. "If she were to partner up with anyone, I'd be so excited for her to maybe partner up with Alex. I can imagine that's still someone in [Saanvi's] life that she could probably really trust," the actor says.

Fan theories about the next season are already bubbling up following the finale, and Kaur is particularly interested in one that I had. Since the Major had mentioned she was trying to weaponize the DNA anomaly to infect people, perhaps Saanvi can re-infect herself. That way she could get her Callings back and try to survive the Death Date with the rest of the Flight 828 passengers. "That's a great way to keep Saanvi alive," the actor says. "When we get off the phone, I'm going to message our showrunner Jeff [Rake] and say, 'Is this a possibility?' ... I think that's a cool idea."

As far as the show's big mystery of what happened to the plane, Kaur has her own theory that perhaps they're in a simulated reality and none of this is real. Of course, the finale cliffhanger about the fisherman finding parts of the exploded plane in the ocean may make that theory a bit less likely to be true. When asked what that new big reveal may mean for the show, Kaur laughed. "I truly have no idea," she says, adding that Rake often takes the mystery in completely different directions than the fans or even the cast suspect. According to Kaur, the actors tend to find out big twists episode-by-episode, and none of them know the ending or big reveals in advance. "It does keep an element of suspense and surprise for us, and as actors there is definitely a benefit to doing that," she says. "It keeps us on our toes, that's for sure. It makes work a lot of fun."

If Saanvi were to get killed off in Season 3, Kaur probably wouldn't know for a little while. And even though it would mean she'd be out of a job, the idea of the character dying is kind of interesting for Kaur. "Man, what a shock that would be if Saanvi died and truly died," the actor says. "Like, I also get excited over that type of reaction. If Saanvi [dies] because of not following the Callings, that's such a big consequence [for] the characters in the show." She compared it to the shocking and unexpected death of Ned Stark in Season 1 of Game of Thrones. "It sucks that you don't see that character anymore ... but it was so worth it for that moment of just utter shock," she says, adding that she has mixed feelings about Saanvi's fate either way.

Fans would certainly be upset if Saanvi were to become the show's next casualty, but it helps a little bit just knowing that Kaur wouldn't be too broken up about it if it happened in service of the larger plot. But, hey, maybe Rake will listen to the re-infection idea and Saanvi will get to live another season.