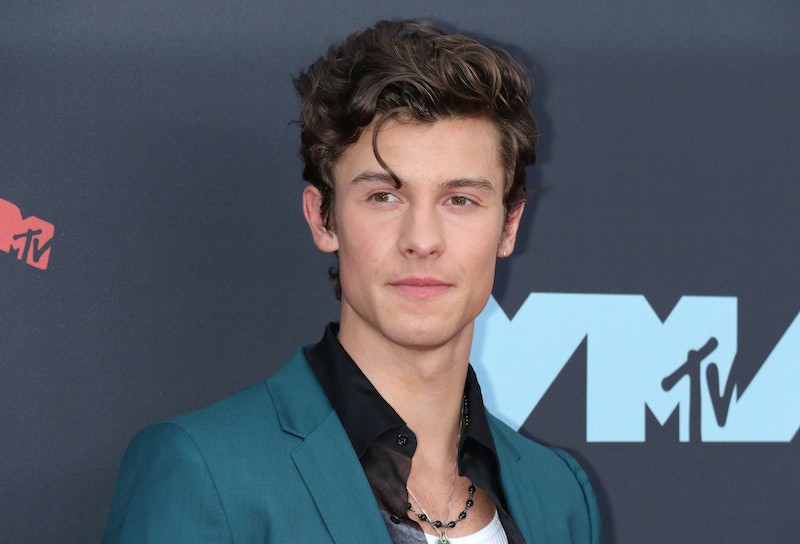 The American Music Awards are fast approaching, which means the nominees have been announced, the performers are lined up, and the presenters are now deciding which shoes will let them walk 20 feet on live television without falling over. But there's still one very important thing left to confirm: whether or not Shawn Mendes will be at the 2019 AMAs. (Well, a very important thing to Shawn Mendes fans, at least.)

Though the 21-year-old singer has not been announced as a performer or presenter, there are a few things that suggest he'll show up. Firstly, Mendes is up for two awards: Collaboration of the Year for "Señorita," his duet with girlfriend Camila Cabello, and Favorite Social Artist, which goes to fans' favorite social media-using music star. Mendes seems unlikely to take home the Social Artist award — BTS, who won last year, are nominated again, and they're known for having a heavily active fanbase. But Mendes and Cabello do have a shot at winning for "Señorita", which went No. 1 on the Billboard Hot 100 won Best Collaboration at the MTV VMAs.

The second piece of evidence that Mendes will attend the AMAs is that Cabello has been announced as a performer. Cabello will likely sing her current single, "Liar," but with "Señorita" being her biggest song this year, she might perform that, too — and she and Mendes have been known to make surprise cameos at each other's shows.

The third clue is that Mendes recently collaborated with Taylor Swift on the remix of her song "Lover." Swift is performing at the AMAs because she's being honored as the Artist of the Decade. Perhaps she'll bring out some special guests...including Mendes.

The final sign that the "If I Can't Have You" singer will be at the AMAs is that he's currently on a break in his tour. His last show was on Nov. 9 in Auckland, New Zealand, and his next concert is on Nov. 29 in São Paulo, Brazil. That leaves plenty of time for him to hit up the AMAs on the 24th and then head down to South America for the next leg of his world tour.

All of that being said, neither Mendes or ABC have announced whether or not he'll be attending — which seems odd given that he had one of the biggest songs of the year and is part of one of the biggest celebrity couples of the year. Wouldn't they want to promote that? Like, Shawn Mendes is a very famous dude, but he's not Beyoncé. His attendance isn't enough to keep people guessing until some big surprise reveal.

Whatever the case, we'll find out soon enough if he decides to show up.