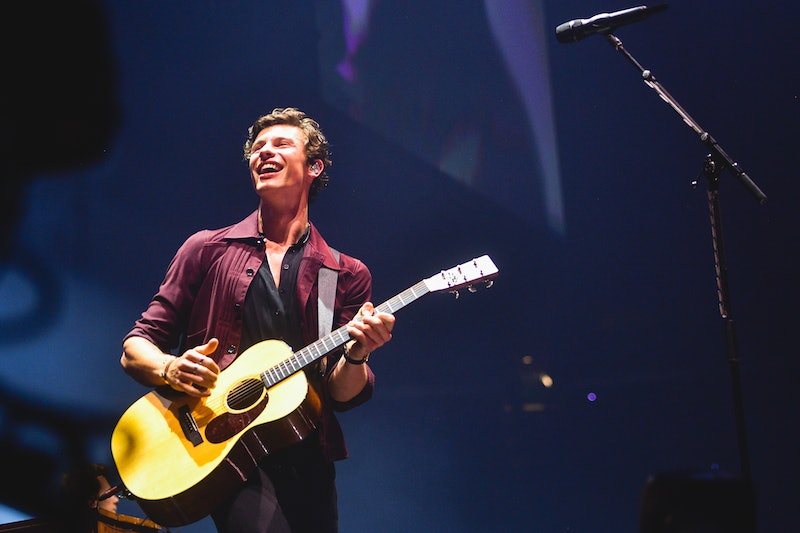 If there's one musician that literally everyone wants to see, it's deffo Shawn Mendes. After finding success with his six-minute covers of pop songs on Vine, Mendes debuted his first album in 2015 and has since gone on to be one of the world's most sought-after artists. After releasing his third self-titled album this year, the singer has been travelling all over the world performing sell-out shows. But will Shawn Mendes tour the UK in 2020?

After touring the UK earlier this year, it doesn't seem like the musician will be returning here anytime soon. Mendes is still embarking on the same tour that he was in England (Shawn Mendes: The Tour), but he's now beginning the Asia, Oceania, and Latin America portion which will see him performing up until Dec. 21. He's had a pretty busy 2019, so it wouldn't be surprising that he took the chance in 2020 to have a bit of a break from touring.

I've reached out to Mendes' rep to see whether there's any more info regarding another UK tour next year, but have yet to hear back. I'll let you know if I do. 2019 is shaping up to be his busiest year yet, so it wouldn't be surprising that Mendes took the chance in 2020 to have a bit of a break from touring. But judging on how successful the current portion of his tour is going, he could be back on the road again pretty quickly.

If you happen to be in Asia, Oceania, or Latin America in the next few months, tickets are available via ticket distributors which you can access through the musician's official site. Mendes will be joined by Dan + Shay for the Perth, Adelaide, Melbourne, and Sydney dates, and Ruel for the Brisbane and Auckland dates.

Most recently, Mendes stole the show with Camila Cabello at this year's MTV VMA's with their stunning performance of 'Señorita'. If you thought Cabello's 'Havana' at the Grammy's couldn't be topped, think again. The hype surrounding their live duet was also down to their rumoured relationship, which although they haven't really addressed the signs are deffo there in the music video for 'Señorita', along with the recent jokey Insta post where the two kissed.

Singer Charli XCX has also kinda alluded that the two are maybe in a relationship but also referred to them as "friends". "I've only met Shawn a few times but he's such a nice guy and Camila is great," she said in an interview with The Sun. "I love her, and think she's amazing, so I'm so happy she is happy. It's always nice to work with your friends."

Regardless, I can't be the only one that doesn't want this Mendes x Cabello collab trend to end. Hopefully, if Mendes does end up doing a second leg of his current tour, he and Cabello could do like a double bill or something along those lines.

Now that would be a gig you wouldn't want to miss for sure.