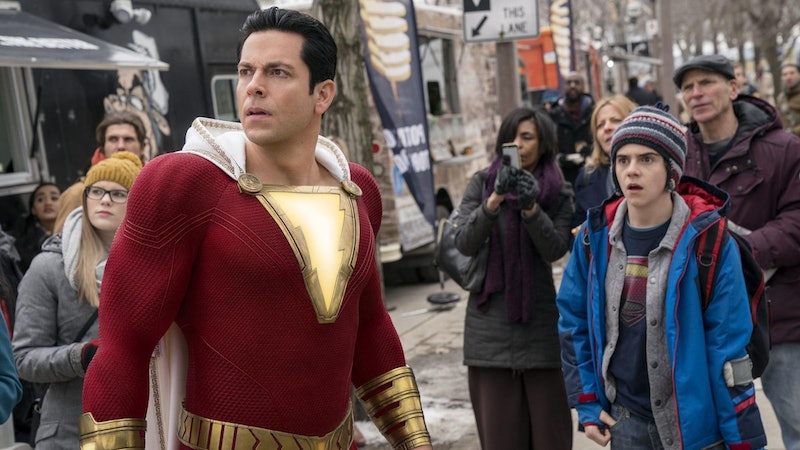 Shazam! doesn't even officially hit theaters until April 5, but fans of the DC character are already looking forward to the future. Will Shazam! get a sequel to continue his adventures in the DCEU? The answer right now, in Magic 8 ball terms at least, seems to be "outlook good."

With a 93 percent score on Rotten Tomatoes, $3.3 million in Fandango paid previews (via Deadline), and CinemaBlend estimating a $50 million opening weekend, the latest comic book superhero film is surely going to be big enough to warrant the risk of Shazam! 2. Director David F. Sandberg hasn't confirmed yet that the story will go on after this first film, but he has sounded a little more positive about returning for a Shazam! 2 more recently than he did back in December. That was when he answered a tweet about a sequel by saying, "It’s just that it takes a crazy amount of work to do a movie like this. It’s like asking a runner at the end of a marathon if they feel like doing another one. You need some time to rest and forget how difficult it was."

In an interview with ComicBook.com, Shazam! producer Peter Safran said he would "absolutely" return for a second film, and with Sandberg ending the interview with a "Let's do it!" Still, the comment wasn't exactly official confirmation, though that doesn't mean a sequel could happen without him at the helm.

At the world premiere of Shazam! over the weekend, though, Sandberg was supportive of the idea of future films. "I just want to see more of these characters because I think there is so much more you can do with them," Sandberg said, according to SyFy.com. "So much more story to tell. Even in this one there was so much fun we couldn’t even put into the movie because it was getting too long so there is certainly more to do."

But because the film's young Shazam/Billy Baston, Asher Angel, is 15 and will surely look older next time he reprises his role, it seems like things would have to move quickly for Shazam! 2.

“It’s something we’ve considered and have plans in place for sequels that take into account those realities,” producer Safran told EW.

In an interview with Marvelous TV, two of Shazam!'s younger actors said they'd be up for returning.

“I hope so, we’re just getting started," said Grace Fulton, who plays Mary. "We’ve just seen Billy gain his powers, learn how to use them and we need to see him fight more bad guys.”

“This is very much an origin story, but we have no idea what Warner Bros. want to do with the film," said Jovan Armand, who plays Pedro Peña. "I think all of us would be happy to come back.”

As for star Zachary Levi, the actor told DigitalSpy he hopes to keep playing the role in whatever on-screen form that might take shape.

"I don't want to get too greedy," he said. "First and foremost, I would love that we get to keep building this world, the Shazam! side of the DC universe. If beyond that, my bosses say, 'Hey, what about going and popping into that person's movie or they pop into your movie?' or, God willing, they make another Justice League and Shazam gets to be in the Justice League, I want all of that. That’s all bucket list stuff, let’s check it off."

Levi told Collider he'd make one major change should Shazam! 2 be realized, though: "I would want to make some adjustments on the suit," he said. "Just to make it a little more comfortable sometimes because it's super tight and there's a lot of pieces .... I was freezing. We shot in Toronto in the middle of winter and it didn't keep me warm at all. And then we'd go on the stage in side and I'd be burning up so I want to work with wardrobe designers and find a happy medium that I'm not roasting in and freezing it. That would be great."