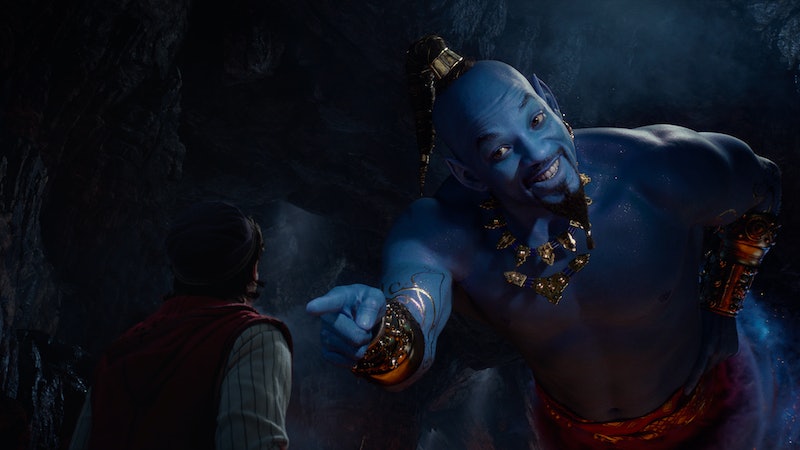 There have been snippets and mini teasers here and there for the new live-action Aladdin movie coming out in May, but it wasn't until the night of the Grammys that viewers got a real look at what the most of the iconic characters will look like in the flesh. And the loudest response from the public were reactions to Will Smith's Genie in Aladdin. "Loud" meaning that it was all anyone could tweet about.

Why all the hubbub about Will Smith's Genie? Well to start, the response to Smith's casting has been somewhat mixed, mostly because the role as originated by Robin Williams in the original cartoon was so beloved. It's a response Smith himself totally understood. In an interview with Entertainment Tonight at the Latin Grammys, Smith said, "I was terrified doing the Genie after Robin Williams, you know. But I found a lane that pays homage but it's my own thing... People are gonna love it." While there's no doubt Smith is hilarious and can create a character that is in the realm of Williams' yet still it's own, it's the new Genie look that has people stumped.

Though fans had seen photos from the live action Aladdin before, this trailer marked the first time they saw Smith as a blue Genie. In previous photos, he looked, well, normal. In this new teaser, however, he has the broad-shouldered, massive body of the Genie, along with the pointed ears, shaved head and pony tail. But the most striking feature is the bright blue hue of his skin. And, well, let's just say fans are noticing that having a blue Genie might be better in animation than live action. And fans on Twitter had no problem giving their brutally honest reactions on Twitter.

This new Aladdin trailer is truly an emotional roller coaster. At first, you're hit with the epic music and the colorful, live-action footage of Jasmine and Aladdin, but then, you see the Genie, and it literally stops you in your tracks. It was a lot to take in all at once. And maybe slightly horrifying for some.

The hype around this movie has been high. As it should be, with such a well-loved cartoon coming to life. But then, if Smith's new look wasn't what you were expecting, it was a sad moment.

David Cross as a blue Tobias Fünke in Arrested Development has an uncanny resemblance to the Genie. Maybe he should have auditioned for Aladdin.

Who knew there were so many blue people in pop culture? Will drums be a part of the Genie's routine?

5. And the look a-likes keep on comin'

Maybe Paul Giamatti in Big Fat Liar is a better match. Look at that animated face! Get Amanda Bynes and Frankie Muniz in here stat.

6. Now they're comparing it to the other live-action Disney movie...

The Lion King CGI movie had a first look premiere at Christmastime, and that was received with widely open arms. But now, the difference between the two is a little too different.

7. This crossover between his YouTube gig and the Genie is hilarious!

When Will Smith appeared as the first person on YouTube Rewind's 2018 video, he might have been the best part of it. With his hilarious Instagram and YouTube videos, he's taking over the social media world. And at least someone's excited for the Genie, right?

Ah, who knew such fame and fortune awaited a YouTube star like Will Smith? The Fresh Prince of Bel-Air would have known, that's for sure.

9. Will Smith's Other Blue Role

With his smooth talk and catchy musical numbers, Oscar from Shark Tale could do some damage as the Genie. A car wash instead of the Prince Ali parade, perhaps?

Was there no one else to edit these? But all jokes aside, it is what everyone was talking about.

The Genie is, in fact, blue da ba dee da ba daa, so why not celebrate it? I wonder if "blue are the words he says and what he thinks"? Is "blue the feelings that live inside him"? Maybe the film will answer that. Oh, and maybe he'll trade in the carpet for a blue Corvette, too.

12. The Genie Is The New Dress

Like the dress that divided people everywhere, the Genie's shocking blue hue can only have the same affect on the Internet. It's only a matter of time.

After what was shown during the Grammys, maybe fans should all be a little more scared about what's to come. Are we going to see Will Smith, looking like the Genie from the film during some of his more transformative looks. Like when he attached his head to two chicken legs? Only time will tell.

Despite this less-than-pleasant reaction, maybe fans will warm up to his look. Or maybe Disney will hear them out and change it up to look less strikingly odd. Either way, though fans might be taken aback by Will Smith's Genie, there's no question they will all be sitting in the theater when the time comes. And then, the real judgement will begin.