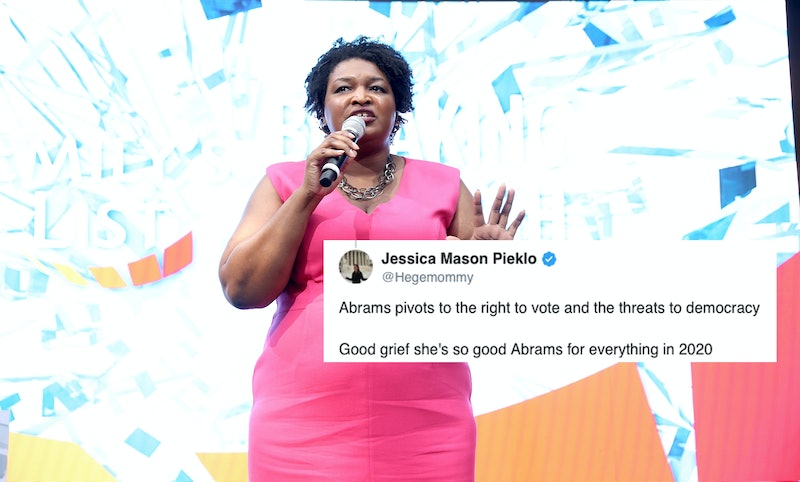 Former Georgia gubernatorial candidate Stacey Abrams delivered the Democratic response to President Trump's State of the Union address on Tuesday night, hammering on the importance of voting rights, affordable health care, and abortion access, among other issues. Her speech fired up Twitter users, and many of them had the same question: will Stacey Abrams run for president in 2020? She hasn't dropped any hints that she will, but she may be considering a number of other positions.

Abrams first introduced herself, painting a picture that many Americans can likely relate to. "Growing up, my family went back and forth between lower middle class and working poor," Abrams said, according to Vox. "Yet, even when they came home weary and bone-tired, my parents found a way to show us all who we could be."

She said her mother, a librarian, taught her to love learning, while her father, a shipyard worker, put in overtime. She said both of her parents volunteered and became United Methodist ministers. "These were our family values — faith, service, education and responsibility," she said.

Then, Abrams tackled a number of the Trump administration's most controversial decisions and policies head on. She said children deserve education "from cradle to career," according to Vox. "Yet this White House responds timidly while first graders practice active shooter drills and the price of higher education grows ever steeper," Abrams said.

She also directly addressed the recent government shutdown — an issue President Trump avoided completely during his State of the Union address. Abrams she volunteered to serve food to federal workers who had gone without pay, according to Vox:

Making their livelihoods a pawn for political games is a disgrace. The shutdown was a stunt engineered by the president of the United States, one that defied every tenet of fairness and abandoned not just our people but our values.

Abrams went on, tackling issues like the tax bill and its effects on the working class, and voting rights and voter suppression — and Twitter was here for it, with many users asking whether she would run in 2020 or hinting strongly that she should.

Abrams hasn't addressed a 2020 presidential run, but at an event in December she said she planned to seek high office again, according to The New York Times. Democrats are reportedly urging her to run as a challenger to Georgia Sen. David Perdue, who is a Republican, in 2020. By doing so, The Times reported that Democrats think "Ms. Abrams could help break the Republican Party’s near-monopoly on Southern power," and help to make Georgia more competitive in the 2020 presidential race.

People close to Abrams told The Times that she hasn't decided about running against Perdue, but that she's taking the requests of her fellow Democrats into account.

Terrell J. Starr, a reporter for The Root, wrote on Twitter that "people saying Stacey Abrams should be on the 2020 ticket as a VP, keep in mind that she can run for US Senate now and hasn’t ruled that out."

Sarah Riggs Amico, executive chairman for transport company Jack Cooper, also tweeted on Tuesday night that she's launching a Crowdpac to call on Abrams to run for federal office in 2020. She wrote on Twitter:

Tonight, I'm proud to watch my friend @staceyabrams deliver the #SOTU response. I believe that Stacey should be in office, serving the people of Georgia – and of this country. That's why I'm launching a @Crowdpac to call on her to run in 2020.

Though Abrams doesn't appear to be eyeing a 2020 presidential run, it looks like her supporters might still be able to get fired up for a Senate campaign.