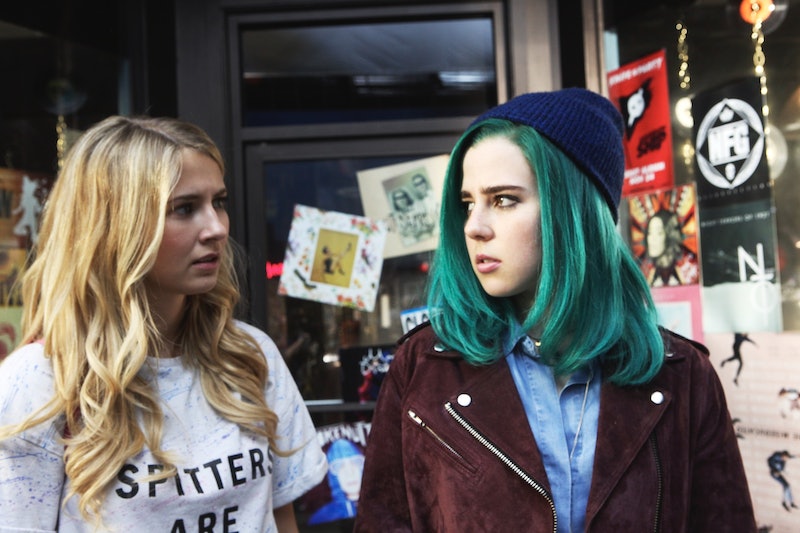 When MTV debuted their newest drama, the vigilante series Sweet/Vicious back in November, it quickly became one of the network's most surprisingly delightful programs. Telling the story of two college students — Jules and Ophelia — who wear masks and work together to fight crime on campus, this superhero-ish story earned rave reviews and quickly amassed a passionate fan base who felt empowered seeing two such kick-ass women save the day on a weekly basis. But with the series about to air its Season 1 finale this Tuesday evening with a special two-episode ender, many of those devoted viewers are likely worried about the show’s future. Will Sweet/Vicious be renewed for Season 2?

While MTV has yet to announce an official ruling one or or another on the fate of the show, there is definitely some cause for concern. It appears that Jules and Ophelia may have finally met an enemy it can’t defeat: Ratings. Among the network’s crop of six original scripted hour-long series, Sweet/Vicious ranks last in average weekly viewership. It seems to be no match for MTV’s brand-name programs like The Shannara Chronicles (the highest-rated series with (889,000 weekly viewers on average) and Scream (377,000). (Un-coincidentally, both of those dramas have already been renewed for additional seasons.)

But Sweet/Vicious also can't keep up with MTV's other off-brand titles like Mary + Jane (368,000) and Loosely Exactly Nicole (198,000): it has averaged a paltry 173,000 viewers throughout the first eight episodes of Season 1. And given that the higher-rated Mary + Jane and Loosely Exactly Nicole both ended over two months ago and have yet to be either renewed or cancelled, Sweet/Vicious fans may be waiting a while to find out whether their beloved show will return.

If there's one silver lining to this news, it's the fact that Sweet/Vicious performs extraordinary well when it comes to increasing its audience size via streaming, On Demand, and DVR throughout the week after each episode airs — a number known as the L+7 rating. According to TVByTheNumbers, Sweet/Vicious sees the fourth largest audience increase across all of cable when L+7 is taken into account, behind only Top Chef, Good Behavior, and Rectify, going up a whopping 118 percent.

It's getting harder and harder to get people to watch live television; so if MTV is paying attention to those numbers and seeing how many people are tuning into Sweet/Vicious across all platforms, there's a chance it could survive to see a second season. It's definitely a slim chance… but Jules and Ophelia have overcome worse odds to save the day.