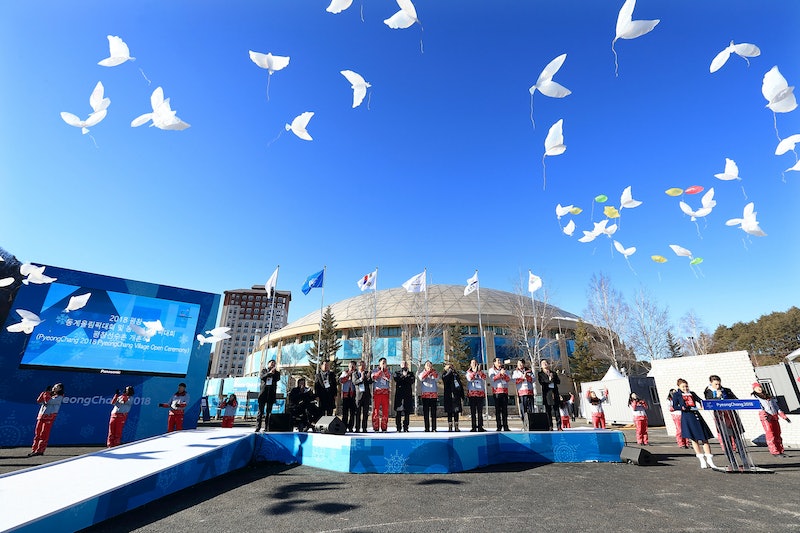 For lovers of obscure or rarely televised sports, the Olympics are the game for you. Only coming around every two years, sports fans around the world gather to see their country win and bring home those shiny medals. But if you're one of the legions of fans who aren't into the TV set thing anymore, you may be asking, will the 2018 Olympics be on Hulu? You need your streaming services, and you need them now to see everything that's happening in PyeongChang, South Korea.

The 2018 Olympics will run from Feb. 8 to Feb. 25, and there's so much to see. To get your fill of skiing, snowboarding, curling, and more, your best bet, if you are willing to subscribe to something, is to use a streaming service that gives you access to live television. Hulu offers it, as does Sling TV, YouTube TV, and DirecTV Now among others. Rates vary depending on the service, but it's probably the easiest way — sans television and cable, of course — to watch triple axels and double-toe loops until your eyes can no longer stay open. Hulu lets you personalize your 2018 Olympics experience, choosing exactly what you want to stream, so if you don't want to watching curling while waiting for cross-country skiing, you don't have to. If you know when the sport you love is airing, you can also sign up for one of those free trial periods and cancel after and save a few dollars. Just because you want to watch the Olympics doesn't mean you can't be thrifty!

Another easy way to watch the Olympics is on NBCOlympics.com, as NBC will be streaming everything for as long as the Olympics are going on. The caveat? You'll need a cable log in after 30 minutes, so you may need to borrow one from a friend to watch all of the festivities. And trust me — there will be plenty. If you're into VR, NBCOlympics.com will let you watch from your virtual reality device, making it feel like you're actually on that skeleton sled racing down a hill! (Vomit bags are not included, though.) According to The Verge.com, the coverage will be extensive. There will be 176 total hours of coverage on regular old NBC; 369 hours of Olympics on NBCSN (the sports network); 46 hours on CNBC (the news network); and 40.5 hours on USA (the network that's only reruns of Burn Notice and Law & Order: SVU).

PyeongChang, South Korea, is ready to host the games but one thing they weren't ready for is the weather. This will be one of the coldest Winter Olympics in decades, with wind-chill temperatures well below zero degrees Fahrenheit. In fact, CBS Sports reported that many spectators watching the Opening Ceremony rehearsals left the open-air stadium, because it was just too cold. Some of participants had signs of hypothermia, and it was so cold that the ATMs strewn about the stadium stopped dispensing money. Do you hear that sound? That's the sound of everyone at home watching the Olympics turning up their electric blankets.

Me? I'll be tuning in for figure skating, hockey, skiing and snowboarding. Will Mikaela Shiffrin nab another gold medal? Can Team USA squeeze out a hockey win in a competitive bracket? And don't forget about Karen Chen and Nathan Chen (they are not related), who are skating their hearts out for Olympic gold. No matter your favorite sport, streaming or watching on television seems to way to go — it's too cold in PyeongChang to enjoy the events. Maybe add a grilled cheese to the mix and hope for American gold.