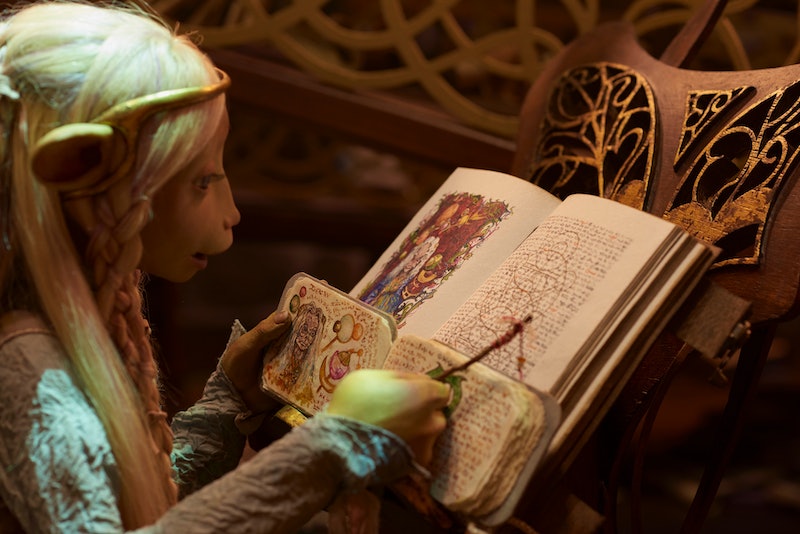 Whether you grew up loving Dark Crystal, learned about it through its cult status, or have no idea what this puppet movie is all about, you'll be able to jump into the sweeping fantasy epic with Age of Resistance. For those needing a refresher, the 1982 movie directed by Henson and Frank Oz is available on Netflix. But The Dark Crystal told the story of the Gelfling Jen who fulfills a prophecy to heal the dark crystal to save his planet Thra. The crystal had lost a shard 1,000 years earlier, which led to the creation of the evil Skeksis and the good mystics urRu. The Dark Crystal: Age of Resistance is set long before the original movie and gives more insight into how the Skeksis gained power over Thra. The prequel series is set long before the near-destruction of the Gelfling race and besides Gelflings and Skeksis, other familiar characters will come in the form of Podlings, Fizzgigs (!), and the astronomer Aughra.

In The Dark Crystal, the only surviving members of the elf-like race of the Gelflings were Jen and Kira. Due to their heroism in healing the crystal, they restored balance and got the chance to rebuild Thra. But Age of Resistance follows Gelflings before darkness completely consumed the planet. Rian (Taron Egerton), Brea (Anya Taylor-Joy), and Deet (Nathalie Emmanuel) lead an uprising to reveal the dark intentions of the Skeksis, whom the majority of Gelflings don't realize are using the Crystal for evil. Unfortunately, because the show is a prequel, fans know that the future for the Gelflings is grim. But that doesn't mean the story isn't worth telling.

The Dark Crystal website outlines how extensive the mythology of the movie is with an almost Tolkien-like backstory. And how Age of Resistance came into existence is almost as equally as long. Vanity Fair outlined how there was supposed to be a Dark Crystal sequel movie and prequel TV show in 2006 that never came to be. But the project was resurrected when director Louis Leterrier began meeting with the Henson Company in 2011 and shared how inspired by The Dark Crystal he was. Yet, rather than adapt the storyline of the 2006 sequel movie, Leterrier told Vanity Fair that he was "less [interested] about what happens after, but more what happened before: What led this civilization to be extinct? What is the story of this genocide — what happened? What tipped the scale and destroyed this world?"

The CEO of the Henson Company (and Jim Henson's daughter), Lisa Henson, explained to the Philippines' Inquirer how they scrapped the sequel story for Age of Resistance to "go back to a rich tapestry during a fresh period of time" when the Gelfling civilization prospered. But for fans who also want to know what happened after Jen and Kira saved Thra, Lisa added, "We published it as a graphic novel, so anybody who wants to know the sequel, it's in graphic novels."

The Netflix show doesn't have anything to do with The Power of the Dark Crystal sequel. But the history of the TV series highlights how the creators have had a lot of ideas over the years about how best to continue Henson's story. And because of that, a Season 2 — whether it is set in the "age of resistance" or some other time — seems entirely feasible. Just hope that if there is a second season of The Dark Crystal series, that it doesn't take another 37 years to happen. Because the world needs as much Fizzgig content as the Henson Company is willing to provide.

More like this
Netflix Reveals First Look At Wednesday In The 'Addams Family' Spinoff Series
By Bustle Editors
Netflix Just Rebooted A Classic ‘90s High School Drama
By Maxine Harrison
17 Years Ago, 'Hannah Montana' Reportedly Almost Cast This 'Gossip Girl' Star
By Grace Wehniainen
The Office Lego Set Includes All Your Favourite Dunder Mifflin Characters
By Sam Ramsden
Get Even More From Bustle — Sign Up For The Newsletter