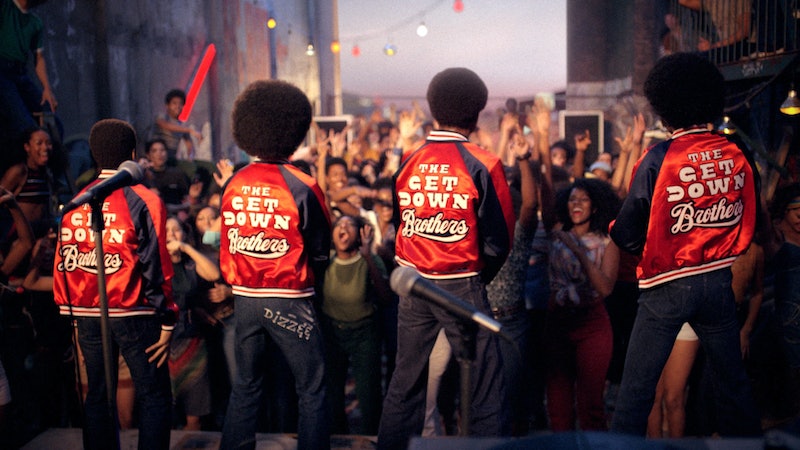 The Get Down returns to Netflix on April 7, but don't call it Season 2. Technically, Season 1 Part 2 is premiering on the streaming platform, and the show itself has yet to be ordered for a second season. If and when The Get Down Season 2 happens, it will follow Zeke, Shaolin Fantastic, and the rest of the "The Get Down Brothers" as they presumably move from the late-'70s and into the early-'80s and the rest of hip hop history.

The Get Down has been a massive production for Netflix, with Variety reporting that the budget for the two-part first season was a whopping $120 million dollars. With such a high cost, the show may have to live up to higher expectations than other Netflix shows to solidify its renewal. Luckily, in a recent interview with Vulture, creator Baz Luhrmann said that both Netflix and Sony are interested in additional seasons. "Sony and Netflix have been very driven about having a second season. There has been no question about that. They really want it," he said. However, Luhrmann wouldn't personally want to be the showrunner for another season, so they'd have to bring someone new on board. He also told Vulture:

"As Cindy Holland of Netflix said to me, 'We are not in the habit of creating awesome characters and then throwing them away.' I thought that was a great quote. She said these characters live, and it’s our responsibility to try and find a way that they live on. That’s what we want to do. Is there formally a second season? No. I know they want it, and we’re trying to find a way that that can happen."

Whether they find a way to make that happen or not, there's likely going to be a classic hip hop hole in your heart that needs filling after you marathon The Get Down Season 1B. Luckily, if you're a fan of the Netflix series, you already have access to a wide library of documentaries covering the classic hip hop era that it dramatizes. Here are the docs to watch when you're looking for your Get Down fix.

While The Get Down takes a focus to the origins of the genre, the documentary series Hip-Hop Evolution starts at the beginning and tracks the development of hip hop from the clubs seen in The Get Down as it transformed from party music to political movement. The four episodes track everything from originators Grandmaster Flash and DJ Kool Herc (both of which are featured as characters in The Get Down) to the birth of gangsta rap — which may be where The Get Down ends up if the series continues.

While Hip-Hop Evolution takes a broad look at the first two decades of hip hop, Sample This looks at hip-hop through the lens of one specific record — "Apache" by the Incredible Bongo Band. The track became one of the most popular hip-hop beats in history, notable for its numerous "Get Down" sections, and was a prominent early example of "sampling," which remains popular in hip hop.

The Art of Organized Noize

If you're finished with the first four episodes of Hip-Hop Evolution and are looking for a documentary look at the next step of hip hop, look no further than The Art Of Organized Noize. The Atlanta production trio known as Organized Noize helped create the sound of Southern hip hop in the mid-'90s that would evolve into one of the dominant sounds of the 2000s, and put Atlanta on the map as major player in the music scene.

Hip hop as a genre is barely 40 years old, but the art form has gone through so many different shifts in style and intention that there is plenty of history to catch up on. While Netflix may not have every must-watch hip hop documentary, it has more than enough to get you started if you're interested in learning about the truth behind The Get Down.