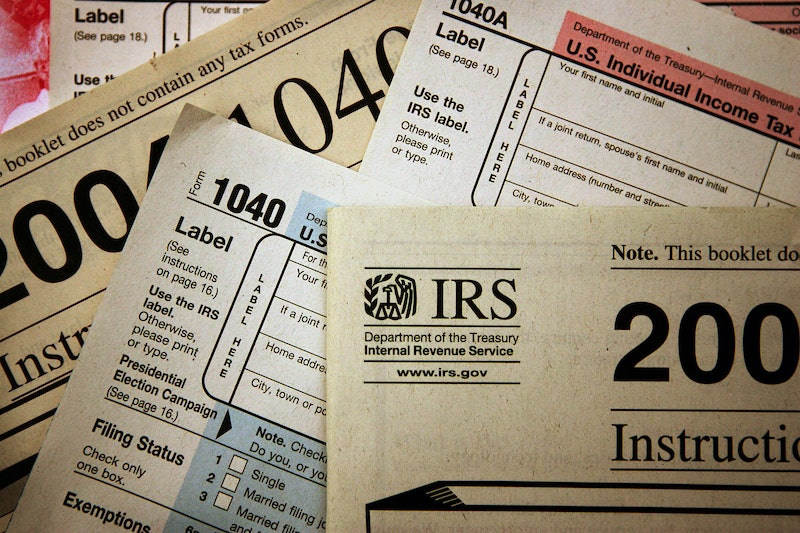 After weeks of debate (and protests), a major tax overhaul is on the way — and there's a lot you need to know about it. Both House and Senate Republicans passed the bill Monday evening without a single Democratic vote, all but assuring that the new tax plan will be signed into law as soon as it reaches the president's desk. Tax legislation is pretty complex stuff, but the main question you're probably wondering is, "will the GOP tax bill raise my taxes?"

The simple answer is that most taxpayers will keep more money in their pockets once the bill takes effect next year. In fact, according to a new report by Congress’s Joint Committee on Taxation, published by the Wall Street Journal, middle-income families — about 50 percent of tax-filers who earn between $20,000 and $100,000 annually — will get $61 billion in tax cuts in 2019. High-income earners — the 1 percent of American households that earn more than $500,000 annually — will also receive $61 billion in tax cuts in the first year, according to the report.

The most important thing to know about the new bill is that while our current tax brackets will be preserved, the rate at which income is taxed for each group will change. Currently, our tax rates are 10 percent, 15 percent, 25 percent, 28 percent, 33 percent, 35 percent and 39.6 percent. Under the new plan, these rates will change slightly for individual filers. You can view the new rates, and determine which bracket you're in, by checking out the chart below.

There is, however, a more complicated answer to the question of how the bill may affect your taxes. The tax bill is actually pretty tricky because its provisions change over time. The tax cuts that the bill applies to corporations will be permanent. But tax cuts for individuals will expire at the end of 2025, meaning that while we'll all be a little happier with more money in our pockets for the next few years, we may end up paying an even higher rate in the long-run.

According to The Washington Post, Republicans have defended this provision by stating that they believe individual tax cuts will be extended by future lawmakers because they will prove popular once the bill takes effect. The only reason a limit was imposed, according to Republican lawmakers, was to comply with budget rules.

Most households will receive a tax cut next year. But according to those who oppose the bill, those cuts come at a very significant cost. The whole reason taxes are collected in the first place is so the government can pay for things like social services and infrastructure. If tax dollars aren't being brought in, that means that the United States has less money to maintain government services that help you.

The new tax bill will cut millions of dollars in taxes from the federal budget, and that cut hasn't necessarily been offset by revenue-raising measures. That means that, according to the nonpartisan Joint Committee on Taxation, the new plan will increase the national deficit by a whopping $1.46 trillion over the next decade, at the expense of things like Social Security and Medicaid.

All in all, the new GOP tax plan — which the first major change we've made to our tax code in almost 30 years — is pretty complex and will have a monumental effect on the American economy. But you don't have to be a tax expert to understand how it will affect you. It's important to delve into the nuances of this bill to understand not just how your own pocketbook will be impacted, but how the entire country, and our future, may change moving forward.