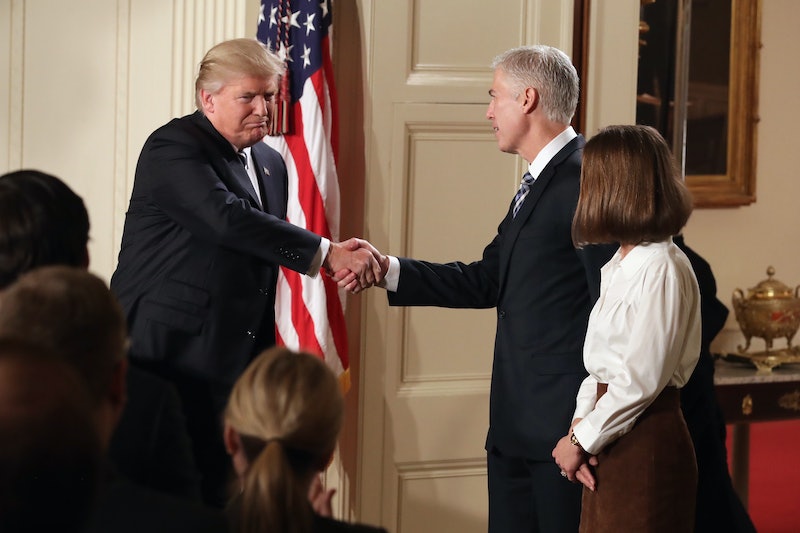 After setting up a primetime announcement to officially name his pick, we finally learned who Donald Trump's Supreme Court nominee is. Neil Gorsuch is Trump's nominee to replace Antonin Scalia, who passed away nearly a full year ago on Feb. 13, 2016. Republicans in the Senate dug in their heels to fight Obama's nominee, Merrick Garland, and it looks like Gorsuch could face a Senate filibuster.

Senate Republicans refused to even hold a hearing for President Obama's nominee for the same seat for 293 days, despite the impressive credentials and relative centrism of his nominee. Garland was considered a relatively moderate choice, and some Republicans' unwillingness to even meet with him has not been forgotten. Many members of the Democratic base feel it's important to call upon their representatives in the Senate to fight back just as hard or harder and refuse to accept any Supreme Court nominee.

Some Senate Democrats have showed sign of listening to their base on this issue. Sen. Jeff Merkley of Oregon told Politico he would filibuster any nominee that isn't Garland, who he believes should have been seated when nominated. This means that Republicans need eight Democratic votes to reach the 60-vote threshold that will allow them to break the filibuster. And some Democrats in states Trump won have pulled back from the intense battle.

The Senate Democrats are in a tough position. An all-out war might not suit them well. They don't have the votes to stop Trump's nominee from getting a hearing as Republicans were able to do with Garland. And there is reason for them to worry about the consequences of this fight.

Back in 2013, then-Senate Majority Leader Harry Reid used the "nuclear option" to remove the threat of a filibuster from nominees below the Supreme Court level. This is why Democrats have been unable to filibuster any of Trump's cabinet nominees, which could have happened under Obama. And once we've seen this happen under Reid when Obama's non-Supreme Court nominees were blocked, there's a very real possibility that Republicans will use the same tactic to eliminate a Supreme Court filibuster.

This is especially dangerous for Democrats considering what it could mean for future nominees. While Gorsuch is certainly far more conservative than Democrats would like, he will probably get confirmed with or without Democratic acquiescence. But removing the norm requiring some level of bipartisan support means that next time there's a Republican president with a Republican Senate, they could feel free to appoint anyone they wanted without any opposition.

Democrats are in a bad position no matter what they do. Stop Gorsuch from getting 60 votes, and they might lose their own power to do it again in the future. Back down, and they face stinging rebuke from an already-mobilized grassroots. Neither option looks particularly good.