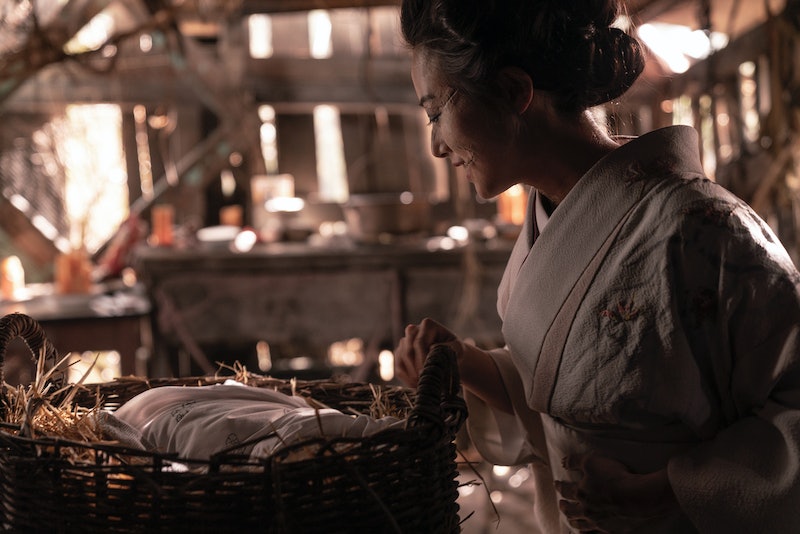 Season 1 followed a fleet of Royal Navy ships lost during a dangerous Arctic voyage. Season 2 focused on World War II-era Japanese internment camps haunted by folkloric creatures. And if The Terror returns for a Season 3, the show will expand to tell yet another terrifying new story.

Unfortunately for fans of the horror anthology series, The Terror hasn't yet been renewed, and ahead of the Season 2 finale, a spokesperson for AMC told Bustle there was no update about whether or not the show will be back. According to TV Series Finale, ratings for The Terror have been lower than they were in Season 1, but that doesn't necessarily mean all hope is lost. The Terror is rated pretty highly on Rotten Tomatoes (88% among critics, 79% among viewers), and its blend of real history with supernatural mysticism certainly makes it a unique addition to the TV lineup. Plus, the anthology format allows the show to both tell a fully realized story each season and liven up its narrative in the next.

All of which is to say, there are limitless possibilities for a potential Terror Season 3. Here are a few ideas for how it could continue.

While primarily focused on Japanese mysticism, Infamy has also tapped into Mexican folklore with Luz's abuela, who is a curandera (aka a shaman). The Terror could take that and run with it by focusing an entire season on Latin American folkore, such as the legend of the Cadejo, a supernatural dog spirit with red eyes and goat hooves. Often, there is a good cadejo and an evil cadejo who appear to travelers at night.

A Season 3 set in Eastern Europe could focus on the vodyanoy, an evil water spirit from Slavic mythology. According to Slavorum, a website dedicated to Slavic culture, the vodyanoy has the body of an old man and the face of a frog. He's said to drown people and animals when enraged, sometimes forcing the humans into slavery in his watery underworld.

In Hindu and Buddhist mythology, a rakshasa is a shape-shifting demon. According to HuffPost, there are many types of rakshasas, each with their own horrifying personalities and powers. They have appeared in pop culture many times before, like in American Gods and an episode of Supernatural, but The Terror could do its own take.

The impundulu, or lightning bird, is a creature from Africa that strikes down humans using lightning. According to author Adrian Koopman, the mythical bird is thought to be the familiar of a witch by the Nguni people of South Africa.

One universal experience that has been explained through folklore is sleep paralysis. Per Frontiers in Psychology, many cultures believe this feeling to be related to the spirit world, including the Inuit and Japanese already featured on The Terror. Thai, Nigerian, Brazilian, Spanish, Egyptian, and Canadian cultures also have their own version of a creature that causes sleep paralysis, so a Terror season focused on this phenomenon could take viewers around the globe.