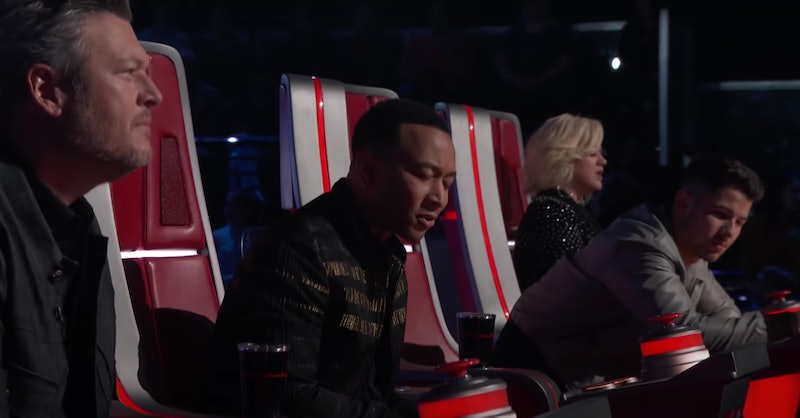 As the reality-competition television juggernaut The Voice wraps its 18th season on May 19, fans are surely wondering whether the star-studded talent show will be returning for another season. The short answer is that like many other shows currently in limbo due to the effects of the novel coroanvirus; The Voice hasn't been officially renewed. However, it is The Voice we're talking about. It's hard to imagine it won't be returning, given the show's consistent top ratings over the years.

Television shows — especially ones with live studio audiences like The Voice — are going to great pains to try to find a way to get back to work while in quarantine. And to keep Season 18 on track The Voice implemented health screening procedures and worked with a greatly reduced staff in order to continue with production of the live studio portions of their program, according to Deadline. Contestants and judges, meanwhile, broadcasted from home, with the former of those receiving high-end production kits to help them create studio-quality recordings of their performances, all to be aired live during what would traditionally be the live competition portion of the show.

That NBC is willing to test new procedures and go on with producing The Voice appears to be a fairly solid indication of how much it's willing to continue to invest in the show's continued existence, though again, there's no hard confirmation that this is the end goal.

Another consideration: The Voice has high Nielsen ratings among that hotly-contested 18-to-49 demographic, according to TV Series Finale. As they report, The Voice's Monday and Tuesday timeslots hold four of the top five rankings in the 2019 to 2020 season, sharing a spot with America's Got Talent: Champions.

In terms of pure viewership over 2019 to 2020, however, only The Voice holds ranks one through four, with America's Got Talent: Champions coming in at fifth. Again, consistently high ratings for a network are a good sign of a show's health, so fans should remain optimistic about Season 19.